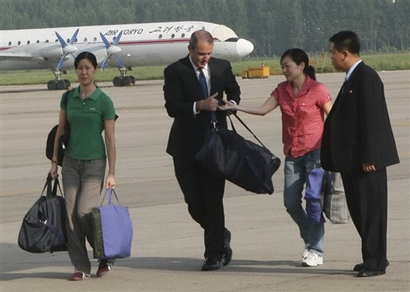 Current.tv journalists Laura Ling and Euna Lee are about to arrive in California after spending 140 days in a North Korean prison having been convicted of committing "hostile acts". The North Korean leader Kim Jong Il pardoned the duo after a surprise visit by Bill Clinton. You can watch the arrival of the two journalists live on CNN.com – if you tune in right now… Current.tv founder Al Gore released a statement about the release of Ling and Lee,

Current Media journalists, Laura Ling and Euna Lee, who have been detained in North Korea since March 17th, will be coming home on Wednesday morning with former President Bill Clinton, who is at this moment returning from North Korea having obtained their release.

We want to thank the Obama Administration for its continuous and determined efforts to achieve this outcome, and President Clinton for his willingness to undertake this mission.

All of us at Current are overjoyed at Laura and Euna’s safe return. Our hearts go out to them – and to their families – for persevering through this horrible experience.

We will have more to say in the days and weeks ahead. But for now, all our thoughts are with Laura and Euna and their families, who have shown remarkable courage and initiative for the 140 days of this ordeal.

Great news that the two have been released, but what about Reuters cameraman Ibrahim Jassam? He’s still being detained by U.S. miltary in Iraq after almost a year. Just look at the amount of attention his case has received in the past four weeks in comparison to the North Korea story, 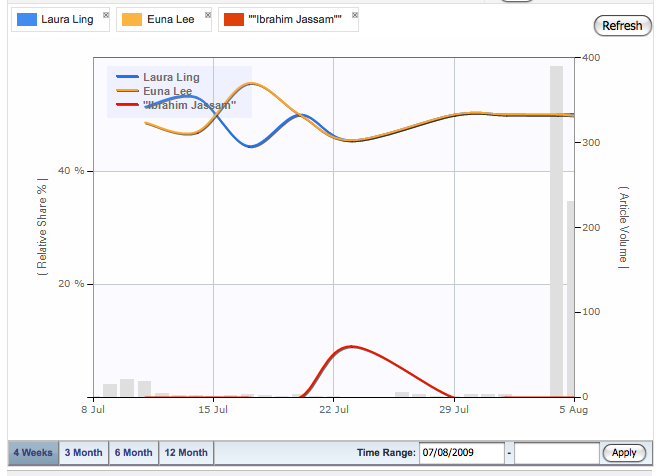 And while I dont want to be too cynical, but how would the U.S. government have reacted if, say, a North Korean hack was found crossing the U.S. border illegally? Or, how about if an Iranian journalist had been found in the possession of confidential U.S. government documents? like Roxanna Saberi in Tehran.

I wonder how ready the U.S. government would be to pardon them? And I wonder how few times the name Ibrahim Jassam appears in and on U.S. media sites during this release fenzy. I’m watching the CNN live feed and I’ve yet to hear the name mentioned once, but I live in completely iditiotic naive hope