Western Ukraine’s city of Lviv was struck by four Russian missiles in the early hours this morning. The death toll rose to seven early afternoon.

Nina Kropotkine-Watson and Paul Conroy reporting from the the scene of a rocket attack in a city that has – until now – been thought of as relatively safe. 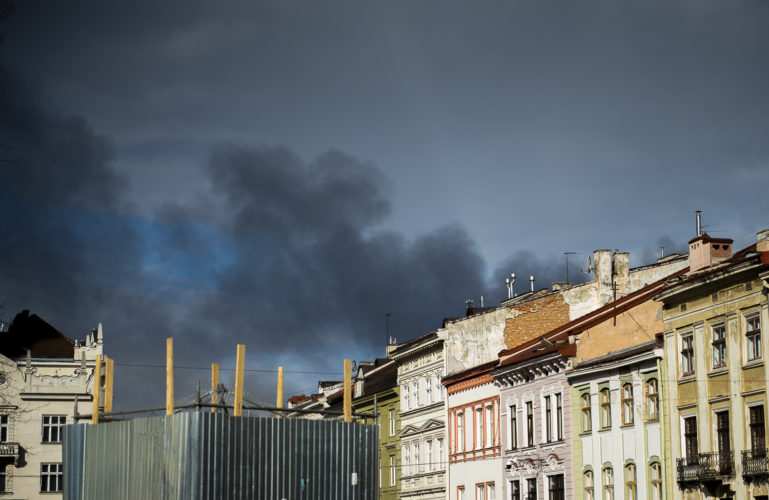 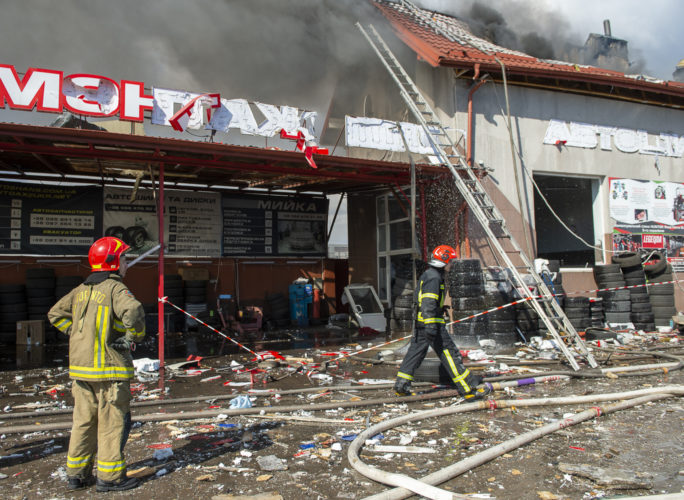 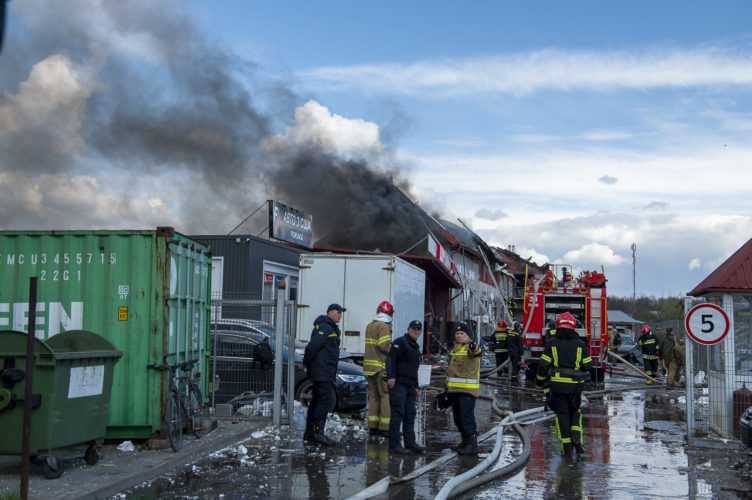 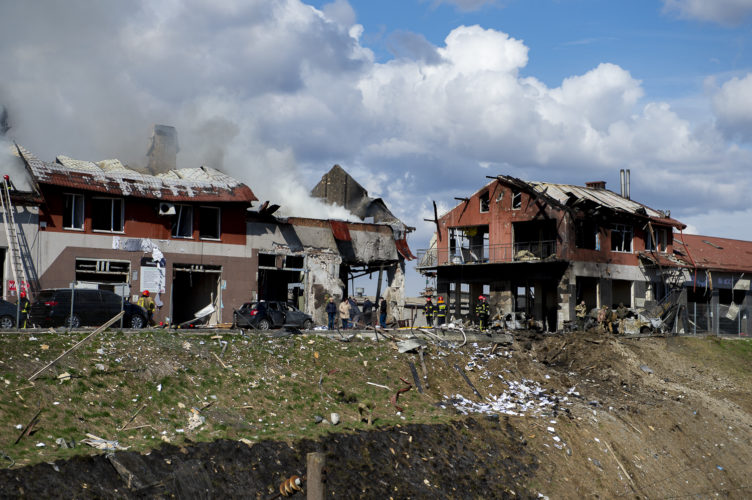 The sound of air raid sirens wailing across Lviv woke us at 7:45.

Our phones started pinging frantically as messages were swapped on social media: there had been a missile strike on Lviv.

The explosions seemed uncomfortably close to the historic city centre where we’re staying though in reality they hit about 6km to the West.

A dense cloud of black smoke crept out from behind the buildings as we peered through windows overlooking Lviv’s Rynok Square. Nervously, we awaited confirmation from Ukrainian territorial defence.

Paul and I decided to follow the smoke. For over half an hour we drove on cobbled streets chasing the smoke cloud as it billowed in the wind, sometimes dense black, sometimes thin. A message from the press centre finally came through giving us a road intersection to aim for.

We were warned to follow strict confidentiality rules on identifying the precise location of the attack. It’s become a criminal offence in Ukraine to give away information that could help the Russians – data, photos and videos on the movement of Ukrainian equipment, military and weapons can all be used to refine missile attacks. “Do not become helpers of the enemy. No sensation is worth the human sacrifice”, the government has warned.

At about 9:30am we passed through a hastily erected checkpoint guarding access to the attack location. Checkpoints are notoriously volatile places in conflict zones, and this was no exception. Nervous soldiers carried guns, scrutinising unfamiliar faces and foreign cars. Some looked in their teens.

We were some of the first journalists to arrive. Our Ukrainian military accreditation press cards seem to carry weight and we drove on through the checkpoint. Barely 50m on, we saw where a missile had struck. It had ripped through the grass creating a huge crater in the earth and debris was sprayed all around. The scars of war.

A man in uniform, smoking a strong cigarette, pointed to where we could park. No cameras allowed, he said. So we went in on foot to see the damage or ourselves. A large building was still on fire above the railway line that’s flanked by two large earth and grass embankments.

Minutes later the air raid sirens started wailing again and we were ushered into a shelter by Ukrainian security personnel. Inside was a crew from CBC – Canadian TV. They were carrying big video cameras. It seemed the soldiers’ mood had changed and Paul ran back to the car to get his stills camera.

When he returned, we walked towards the burning building. By now, rows of ambulances, soft-skinned military personnel carriers and fire trucks were parked in a neat line. The fire brigade briefly pulled out, worried about a ‘double-tap’ attack where a target is bombed, then bombed again soon after to kill first responders at the scene. The Russians perfected this horrendous tactic in Syria.

By this point, smoke was billowing out of the building. You could taste it in the air, pungent and acrid it caught the back of the throat. At one point, an angry civilian gesticulated at us, unhappy that our presence might inadvertently help the Russian’s with their targeting.

As the fire brigade re-entered the building wwe decided to seize the chance to follow in their footsteps, being careful to avoid eye contact in case someone would question what we were doing there.

The floor was covered by two centimetres of fresh water, glistening in the sun, a mirror for the chaos all around.

Paul tucked himself behind a pack of blown-up cars eager to get some shots. I hid behind the remnants of an empty, destroyed kiosque. A solitary, child-sized blue and yellow flag fluttered in the wind.

Shards of glass and plastic covered the floor. Burnt vehicles and fallen masonry quietly marked the blast damage. After a couple of minutes, the head fire officer ordered us to leave the scene.

We joined the rest of the press on the opposite side of the embankment from the fire. Journalists huddled around in their snazzy helmets and flak jackets recording, photographing and filming themselves in front of the fiery backdrop.

Paul and I decided it was time to pull out and head back to central Lviv. Heavy traffic, road closures and tougher checkpoints to pass slowed our pace. At one point, it even started to snow.

We eventually managed to park the car and rushed into the press centre where the Mayor of Lviv, Andriy Sadovyi was holding a press conference, 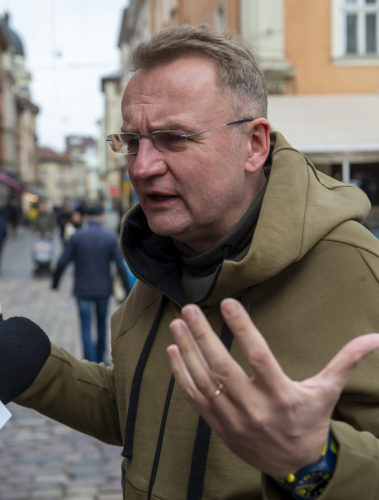 “Russia is a Nazi country, that is the new reality. I expect a strong message from all leaders about this aggression. We must be ready for another attack in my city and cities of West Ukraine. Russian aggressors are killing civilians and that is the reality…I am an optimist, I believe in my victory. We want peace but must be ready for a new Russian attack. Together we must protect our country. We have only one country. I believe in our victory. Never give up”, he told the crowd.

Maksym Kozytsky, the Head Lviv Regional Military Administration, also made a spontaneous press statement: “If you can help by providing weapons, then give us the weapons. If you can help then help, we are ready to fight for our independence. From your side you also have questions to Russians that have not been solved since the Second World War. Please do this.”

Tonight the city of Lviv mourns, its peace has been shattered.