The View From The Camps 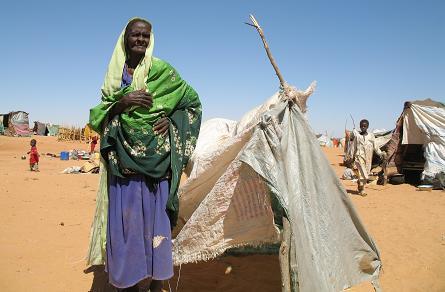 We’re all set. My email inbox is filling up with contact details of Darfur activists available for interview, NGOs are being booted out of camps and I have stocked up on provisions (Maryland cookies, Laughing Cow cheese triangles, and water, since you asked). All we need now is tomorrow’s decision from the International Criminal Court judges on whether President Omar al-Bashir should indeed face trial for his government’s actions in Darfur.

It’s could be a rocky day here in El Fasher, capital of North Darfur. Government officials have warned us that they will be putting on a show from 9-30 tomorrow morning. Expect helicopters overhead and demos in the streets. All of which makes for quite a tense feeling around the place.

The Save Darfur movement and human rights campaigners will tell you that it’s all worth it. There need be no conflict between peace and justice, according to John Prendergast and Omer Ismail in today’s San Diego Tribune…

During our eight trips to Darfur since the genocide began in 2003, we have found that displaced and war-affected Darfuris don’t see a tension between justice and peace, and rightly note that one will be very hard without the other. The refugees and displaced put the problem in the clearest of terms: How can you have peace when the president of Sudan has tried to exterminate us, stealing our land, killing our men and raping our women? How can you have peace without justice?

Good point (here’s my rather pompous take and Steve Bloomfield on why it’s not a genocide). But I can’t help feeling that they’ve been speaking to different people from the ones I have met in five camps across North and South Darfur this past week. Few have time for this debate. Few have heard of the International Criminal Court. Those that have are worried the government will come down hard on anyone celebrating Bashir’s indictment. And most seem to think that going home is more important than anything else.

Forgive me for putting words in their mouths, but I’m interpreting that as putting peace ahead of justice.

Today I met families who fled the fighting in Muhajiriya (incidentally they may not actually have fled – but that’s a post for another day). Some 50,000 are on the move. About 26,000 have arrived in Zam Zam camp. (A smaller number have made their way down to the camps around Nyala. I met some of them in Otash.)

One of them was Mariam Ahmed Abu, who reckoned she was 60 but looked more like 80 and whose daughter had been shot by her side during the fighting for Muhajiriya. She had survived six years of war but left when she realised she no longer had any children left to care for her. She made the journey with a dozen or so other elderly women who had all run out of children. This is how she summed it all up when I asked her about seeking justice for the misery inflicted on her:

This is what happened and now we have to live and to forget it.

She hadn’t heard of the ICC until I asked her about it and I’m starting to think that taking Bashir to the Hague will be more of a victory for activists far away from Sudan than for the people stuck in this miserable war.