The event, taking place on the eve of the fifth anniversary of Tim’s death, saw the Trust bestow this year’s Visionary Award of £20,000 and a special mentorship on one of a shortlist of five artists and journalists. Stephen Mayes, executive director of the Trust, said the recipient of the award should be someone who “takes [Tim’s] ethos and develops it in a way to better understand the world”.

The evening began with a discussion with the recipients of last year’s Visionary Award, Kel O’Neill and Eline Jongsma. The American and Dutch duo’s project entitled The Ark traces the decline of the northern white rhinoceros through an immersive documentary that “explores how contemporary conservation tactics reflect Western attitudes toward Africa.” The piece follows armed rangers in Kenya who battle to preserve the last remaining herd, while also filming scientists in San Diego attempt to “de-extinct” the rhino using stem cell technology.

The two-person documentary crew have worked together since 2009 and created their project through a blend of different media, including virtual reality. “We always like to choose a form that matches the content. The story is about humanity’s relationship with a technology we’re ambivalent about – stem cell – made using a technology we’re ambivalent about – virtual reality,” Jongsma said. “It was impossible to make this without the Trust,” O’Neill said, adding: “It’s an amazing honour.”

Mayes announced this year’s winner as Dominic Bracco II. Bracco’s ambitious project beat off stiff competition, including explorations of issues ranging from the Rwandan genocide and Ebola in Sierra Leone, to the poisonous water in Flint, Michigan. Bracco’s project, The Backs of Men, is set in the borderlands of Texas, Mexico and Honduras and through a combination of photography, video, and theatre, Bracco “attempts to break down the physical and societal borders we place around ourselves.” Mayes said the review panel were particularly impressed by the progress he had made on a seemingly impossible project. 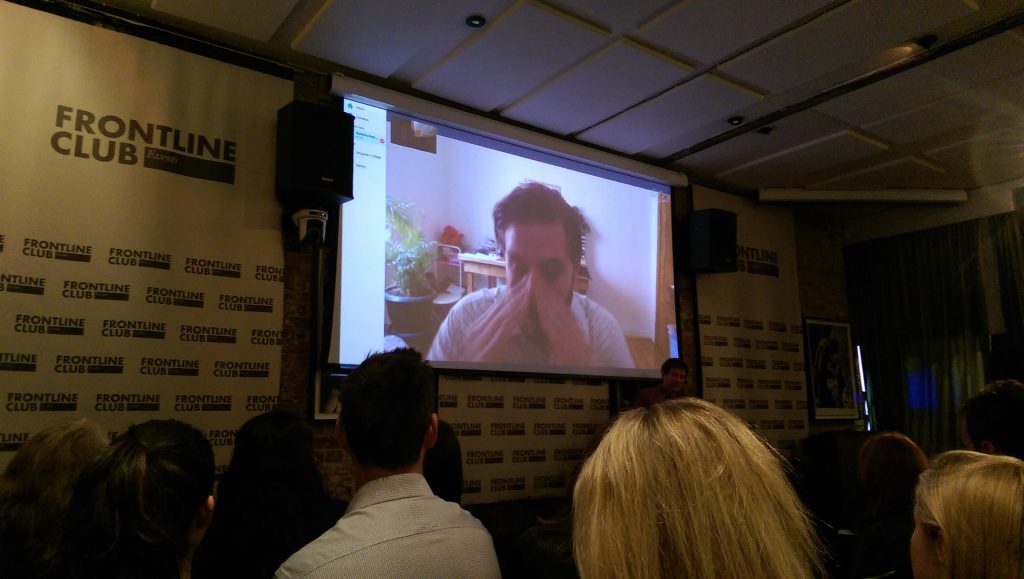 Dominic Bracco II discusses his project The Backs of Men

Speaking via Skype from New York, Bracco said he had spent years working in Juarez, South Texas and Honduras, taking photos that “didn’t speak to the nuance of being there and being a part of it.” He described the £20,000 prize as a “game changer” that will help him find a space to perform theatre and exhibit photographs so that an audience can “experience the play but also other media.”

Bracco added: “Tim did so much for photojournalists. He was a great visionary who created amazing powerful work and was also willing to work with other people.”

Mayes then announced the winner of the inaugural Tim Hetherington World Press Photo Fellowship, awarded to Ghanaian photographer Nana Kofi Acquah, whose main area of interest is the history of slavery in Africa and how the rest of the world views the continent. “What the world sees of Africa is often a negative, stereotypical image,” he said.

Judy Hetherington, Tim’s mother, concluded the evening by thanking everyone who works so hard to honour Tim’s memory and promote his ethos.