Day two in Lal Por and something more substantial was planned. Building on the same idea as the day before, the unit wanted to probe the area that they believed insurgents are regularly passing through. North of Lal Por is a village called Saray that coalition forces haven’t been to yet, which can hardly be unusual in a place like Afghanistan. Since this is where we planned to visit, there was a fair amount of talk about “coalition virgin territory”. The village is about ten kilometres north of Lal Por in a valley parrallel to the one we entered the day before but along the kind of roads, or more to the point river beds, that don’t make for easy travelling.

This expedition was going to be larger in scale and the Route Clearance Package (RCP) had also been called in. The RCP is a unit specialised in IED clearance, which has some pretty strange looking vehicles with extendable arms and fold out platforms. All together we were a total of 27 vehicles, including nine from the RCP, five from a Quick Reaction Force (QRF) led by the company’s Commanding Officer and a further four ANA trucks. Needless to say we didn’t exactly look subtle.

Shortly after the RCP had rolled into Lal Por, a white kite was spotted flying on its own towards the fringes of the town, higher than the kites usually reach. There was speculation that it was signalling that we had “force multiplied” and one of the RCP guys added “there’s too many vehicles now for us not to be up to something”.

The journey up the valley would have been slow at the best of times but two vehicles were demobilised, one due to a broken steering column and the other to unknown engine problems, causing us to stop several times. In the end four vehicles were left near the mouth of the valley protecting one of the broken down vehicles, the RCP stopped short of the final destination and the QRF was holding back at some distance, so that we were eventually eight vehicles that pulled up to the sleepy village of Saray. 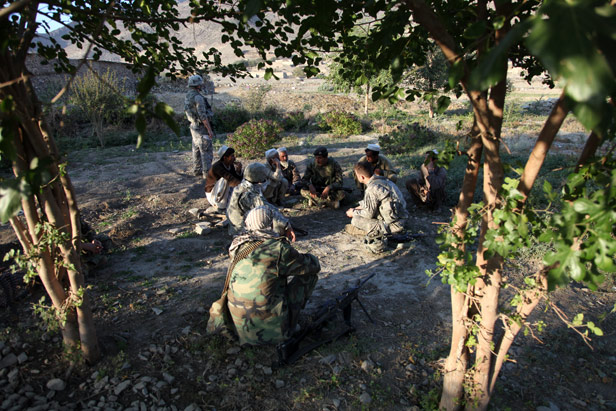 Having been in the last vehicle I was late on the scene and by the time I turned up Lt Schenck was in the process of conducting a KLE under the cover of some trees on the edge of the village and had already promised a well to the elders. I don’t know how he gathered the three elderly men who were with him, whether they knew in advance about our arrival or whether they were representative of the village. He questioned them about their connection to the district administration and what they felt might be improved, although the honest truth would be that they avail of next to nothing, if anything whatsoever, by way of government/district services and so there was little room for manoeuvre in the conversation other than to reaffirm that the well was theirs if they wanted it. He also questioned them about the Taliban and if nothing was lost in translation they seemed to genuinely share his concerns about their presence.

The problem for these villagers, like so many others in Afghanistan, is that they’re between a rock and a hard place, if they talk with the Americans, then the Taliban may take revenge but if they harbour the Taliban, as may be demanded of them, then they may soon find their doors being kicked down. Either way suspicion falls on their shoulders. To be honest, unless real change could be effected, meaning at the very least proper education and opportunities, you can’t help but think they might be better off if everybody left them alone to harvest their crops and wait for a radio station to occasionally break through the static. 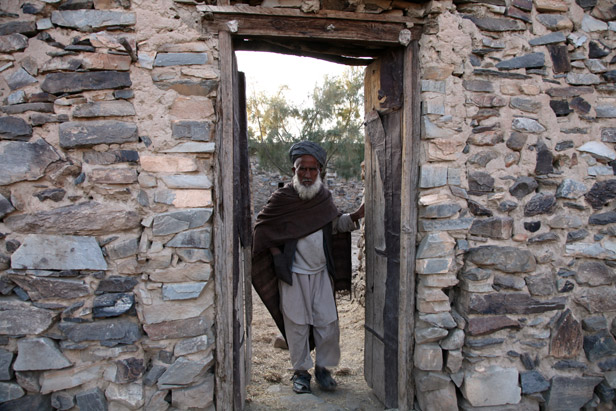 The stay in Saray was short but I would have loved to spend more time there. I imagine nothing much has changed for centuries, well apart from the truck which they were busy overloading to the point of absurdity which is de rigueur in Afghanistan. Ok, ok, so there were probably also some mobile phones and half the village probably prefers smoking Marlboros. But, minor details aside, it looked like it might have been unchanged for centuries.

Turning back to base it should have been obvious what was about to hit us, and then, the words came crackling over the radio, right on cue . . . “we’re taking indirect from the mountain” . . .