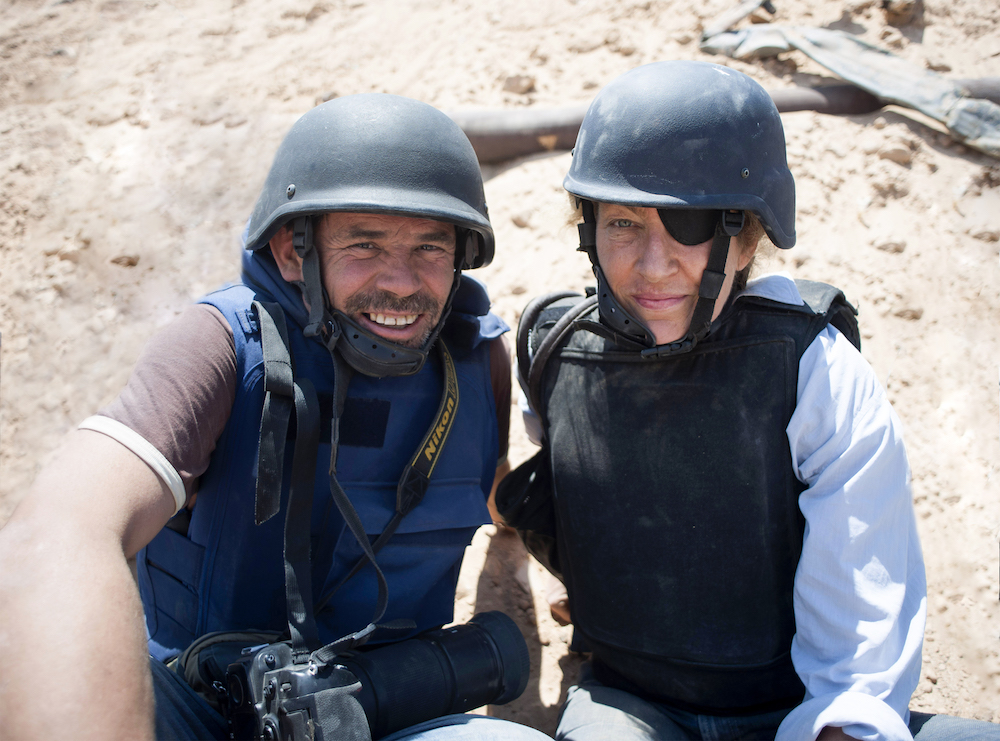 Under The Wire + Q&A

Join us for the screening of Under The Wire followed by a Q&A with friends and family of Marie Colvin’s. On 13th February 2012, two journalists entered war-ravaged Syria. One of them was Sunday Times war correspondent, Marie Colvin. The other was photographer, Paul Conroy. Their aim was to cover the plight of Syrian civilians trapped in Homs, a city under siege and relentless military attack from the Syrian army. Only one of them returned. Based on the book of the same name by Paul Conroy, Under The Wire tells the incredible story of his and Marie’s fateful mission – and Paul’s epic battle to escape the city, to tell the world of his fallen colleague and the plight of the people of Homs.

Lindsey Hilsum is Channel 4 News’ International Editor. Her biography, “In Extremis; the Life of War Correspondent Marie Colvin” will be published in November. She has covered many of the conflicts of recent times, including Syria, Ukraine, Libya, Iraq and Afghanistan. She has also reported on the Trump administration, terror attacks in Europe and refugees, and was Channel 4 News China Correspondent from 2006 to 2008. During the 2004 US assault on Falluja, she was embedded with a frontline marine unit, and in 1994, was the only English-speaking foreign correspondent in Rwanda when the genocide started. She has won awards from the Royal Television Society and BAFTA, aswell as the Charles Wheeler Award and the James Cameron Award, and was the recipient of the 2017 Patron’s Medal from the Royal Geographical Society.  Her writing has been featured in the New York Review of Books,  Granta, the Sunday Times and the Guardian among other publications. Her first book was ‘Sandstorm; Libya in the Time of Revolution’.  Before becoming a journalist, she was an aid worker, initially with OXFAM in Latin America and then with UNICEF in Africa.

Scott Gilmore is Staff Attorney at the Center for Justice and Accountability. He is an expert in strategic litigation on behalf of victims of international crimes in national courts, including cases involving genocide, crimes against humanity, war crimes, torture, sexual and gender-based violence, universal jurisdiction and foreign sovereign immunity. For the past six years, Mr Gilmore has investigated war crimes and torture in Syria and filed the first-ever war crimes case against the Assad regime for the targeted killing of American journalist Marie Colvin. He has investigated crimes committed against Yezidi, an ethno-religious minority targeted by ISIS, for potential prosecution of Duvalier-era officials in Haiti, and pioneered litigation strategies to challenge cyber-surveillance targeting journalists and human rights defenders. He has a BA from McGill University, a JD from George Washington University Law School (high honours, Order of the Coif), and certification in international human rights and humanitarian law from Oxford University. He was formerly a professional musician in the Indie rock bands A Silver Mt. Zion and Black Ox Orkestar, and a theatre performer in Le Petit Théâtre de l’Absolu.

Paul Conroy is a former soldier who spent seven years with the Royal Artillery. He developed a passion for photography and first became involved in journalism on a mission to the Balkans. He has since worked extensively as both a photojournalist and filmmaker in combat zones around the world, producing footage from conflicts in the Balkans, Iraq, Democratic Republic Congo, Rwanda and most notably Libya and Syria. Paul first met Marie Colvin in March 2003 in Syria. He was attempting to smuggle himself across the Tigris on a raft made of tubes stolen from lorries, with the aim to get into Iraq to cover the final assault on Baghdad. A firm friendship was forged over their many shared interests: sailing, whiskey, and their extraordinary dedication to covering the atrocities of war. Having worked together in Libya in 2011, they were a natural pairing for an assignment to Homs. They were determined to cover the Syrian regime’s brutal crackdown and the devastating impact this was having on civilians. Conroy is the author of Under The Wire. Offering a testimony of war reportage, and a personal account of the final assignment he embarked on with Marie Colvin.

Cat Colvin is Marie’s sister. She and her three children filed a lawsuit against Syria in 2016 in U.S. District Court in Washington D.C., alleging that Marie was targeted and killed by the Syrian regime. Cat is the founder of the Marie Colvin Fund, which supports charitable organisation that reflect Marie’s life-long dedication to humanitarian aid, human rights, journalism and education. The fund’s primary donation recipient is the Marie Colvin Center for International Reporting at Stony Brook University of Journalism, where Cat serves as a founding Board Member. The mission of the Marie Colvin Centre is to nurture and grow the next generation of overseas reporters, to cement Marie’s legacy by rewarding tenacious overseas reporting with a journalist-in-residence fellowship, and to raise awareness about the need for robust international coverage through the Marie Colvin Distinguished Lecture Series, which has welcomed Christiane Amanpour, Clarissa Ward, Ann Curry, Rukmini Callimachi and Lindsey Hilsum. Cat currently serves as General Counsel and Senior Vice President of a large US-based multinational corporation, where she is responsible for all aspects of legal and regulatory affairs, and architect of her company’s Charitable Giving Programme, which promotes active participation by more than 10,000 employees worldwide in STEM education, humanitarian and environmental causes. After graduating from Yale Unversity, Cat started her career as Programme Director for the Executive Council on Foreign Diplomats, then spent several years working as a professor of Rural Development for United World Colleges at FUNDACEA in Barinas, Venezuela. Cat is a graduate of Fordham University of Law and began her legal career as an associate of International Project Finance at Shearman & Sterling in New York, the law firm that currently represents her in the Colvin v. Syria lawsuit, along with the Center for Justice and accountability. She subsequently worked as a foreign Legal Consultant for Baker & McKenzie in Santiago, Chile, and in house Corporate Counsel for the Independent Film Channel in New York.

Chris Martin is an award-winning director he has made films for all the major UK and US networks as well as a number of feature documentaries (Palestine is still the Issue, War on Democracy)