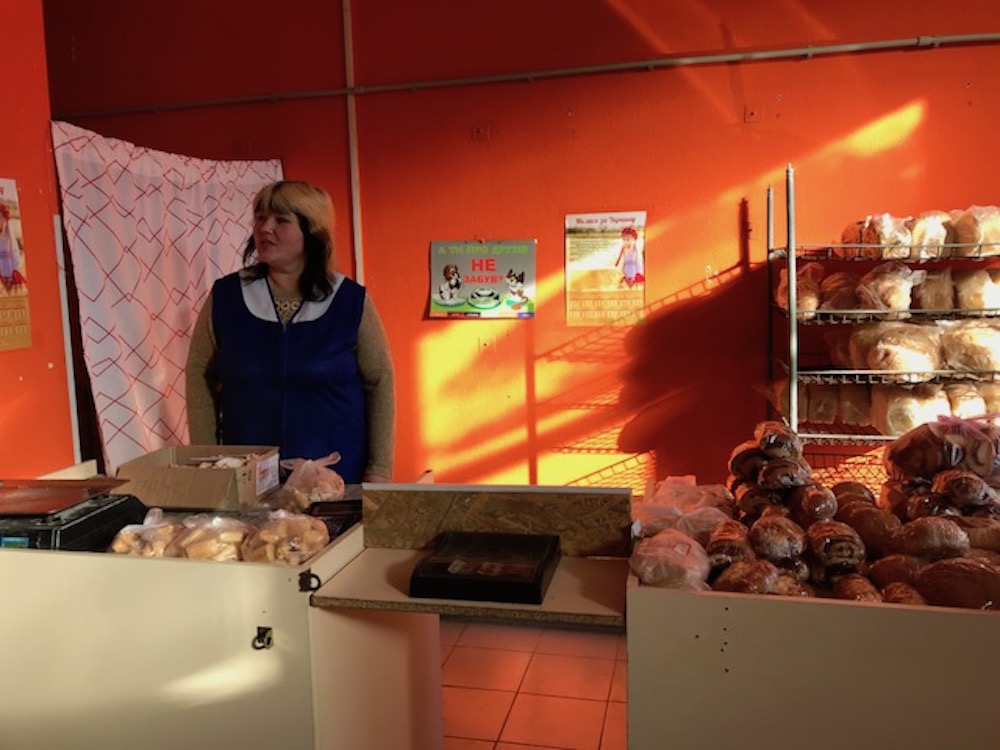 The war in eastern Ukraine between Russian-backed rebels and the Ukrainian army has killed more than 10,000 people over four years, and peace remains a distant prospect. Despite the violence and poverty though, civilians in the war zone try to live as normal a life as possible. We explore how everyday living continues in the middle of a war zone by screening “Ukraine’s Frontline Bakery” followed by a Q&A with the film makers.

In the frontline town of Marinka, a new bakery has opened which brings some comfort and sustenance to war-weary locals. The film follows the people who run the bakery and the customers, as they struggle to gain a sense of normality among the rumble of war.

Roland Oliphant  is a Senior Foreign correspondent to the Telegraph and until recently covered Russia and the former Soviet Union from the Moscow bureau. He has reported on the Ukrainian revolution and civil war from Kiev, Crimea, and Eastern Ukraine.

Albina Kovalyova (producer / director)  –  is an independent documentary producer/director, with extensive experience of covering the Ukrainian conflict from both sides of the line for major global television channels including NBC, Channel 4, BBC World and Al Jazeera. Her other documentary work includes films about the Belarus Free Theatre, Nenets Reindeer herders in Russia’s Arctic region, and Ukraine’s Aids Epidemic for the BBC, and an independent documentary about the Dau film set in Kharkiv. She is fully bilingual in Russian and English and has dual nationality.

Lucy Ash (presenter)– is an awarding-winning broadcast journalist with more than 20 years’ experience as a BBC correspondent, presenter and senior producer. Her most recent work includes: Ukraine’s Frontline Bakery (Radio 4, World Service and BBC World TV) a radio documentary and film about a new bakery in the town of Marinka, Eastern Ukraine, which is bringing some comfort and sustenance to the local people amidst the trauma of war; The Red and the White (BBC World Service, BBC Russian) a three part radio series on the Allied Intervention in North Russia at the end of WWI;Russia’s Exit Dilemma (Radio 3, World Service) in which Ash meets emigres, exiles and staunch remainers in London and Berlin, Moscow and St Petersburg to weigh up the prospects for the young and ambitious in today’s Russia. Other works by Lucy Ash includes Putin’s Park, Rebooting Rural Russia and Extreme Selfies – Russian Style, amongst many others. Ash’s freelance work outside of the BBC, includes the Guardian, The Times, and The Daily Telegraph. A half hour film When the West Invaded Russia, by Lucy Ash is due to be broadcast in March 2018.

Dr Anna Matveeva is a visiting research fellow at Kings College London. She is a member of the Russia and Eurasia Security research group. Her work specialises in conflict studies and developmental aspects of international peace building. The geographical remit of her interests covers conflicts in the Ukraine, the North and South Caucasus, and in Central Asia. Most recently, she has published a book, Through Times of Trouble: Conflict in Southeastern Ukraine Explained from Within (Russian, Eurasian, and Eastern European Politics) based on first hand accounts of participants themselves.