Kendall started by asking the panel to explain what the situation in Ukraine is like now.

Victor Balagadde, editor of Kommersant UK said that negotiations were the answer and the first signs of that were beginning to show:

“At last we are getting some positive news from the east of Ukraine, the fact that Mr Poroshenko and Mr Putin spoke over the phone last night and that there is a ceasefire in Lugansk . . . but this is just the first positive news we are getting nobody says that tomorrow the news might be much worse.”

Yevhen Fedchenko, director of the Mohyla School of Journalism and one of the founders of stopfake.org said:

“There is a joke now on Ukrainian social media that actually Ukrainians owe Mr Putin a huge monument because [what started in] November he did what Ukraine could not start in 1991. . . . Because Putin brought sense to what Ukrainian people are and what Ukraine is about. Unfortunately it came through the war . . . and it’s a huge price to pay for the state building and nation building. . . . Now it has become much more clear who is who in the game and Ukrainians become much more self reliant in what they’re going to be.”

But can Ukraine truly be neutral?

“That part [the east] of Ukraine is Russian, they considered themselves to be Russian. They speak only Russian.”

“I speak only Russian, that’s not conclusive,” said Katya Gorchinskaya, a Ukrainian and deputy editor of the Kyiv Post and who also belongs to a group of journalists who investigate documents found in Mezhyhirya (YanukovychLeaks).

“All the Russians in Ukraine watch Russian TV, read Russian books. . . . [Moscow and the Kremlin have] been dragging Ukraine into its sphere of influence but for Ukraine . . . being independent of any alliance is very difficult because part of the population is part of this Russian culture.”

There was some discussion and disagreement between Dmitry Linnik, head of the London bureau for Voice of Russia, and Gorchinskaya and certain members of the audience about what part of the Ukraine see themselves as Russian nationals and what part are of Russian origin.

Fedchenko summarised the predicament Ukraine is in:

“It’s the 21st century and any country which says that everybody should be equal and the same . . . probably belongs to the 19th century. . . . We have very different people living in Ukraine with very different culture, language, religion and that’s exactly all they need; Russian media is trying to use it to fan another problem around because they consider it to be a problem. Ukraine has moved to another stage where diversity is not a problem – it’s not a problem for Britain, . . . for United States, for France.”

The complex matter was returned to frequently throughout the discussion and an audience member added later on, “It’s not a Russian–Ukraine divide as simple as a borderline.” 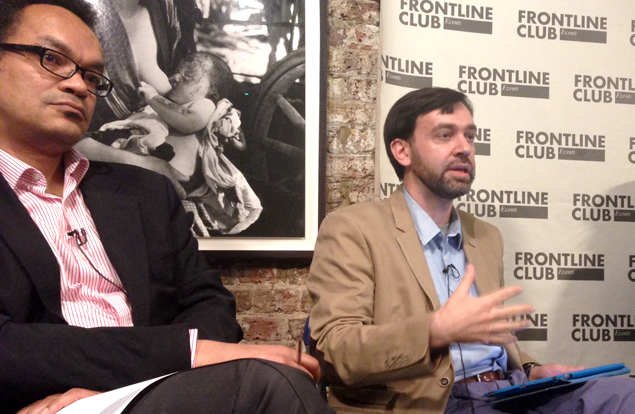 Victor Balagadde and Yevhen Fedchenko at the Frontline Club

What’s the role of the media?

“What is different to other conflicts is this huge avalanche of propaganda which is pouring on Ukraine and on the West, as well, and on Russian people. It’s probably more dangerous than military warfare itself [as] it can damage much more people because the war is quite local and it’s just in two regions of Ukraine, but when we speak about propaganda, it reaches to every corner and nobody can say that they are safe.

“We started our project in early March and since then we’ve already had more than 200 stories from Russian media debunked. They were completely falsified and distorted. They mixed facts and fiction to the extent where people who are reading the news just cannot know the difference.”

“I’m not going to defend [Russian media], I will agree to an extent with Fedchenko about misrepresentations in Russian media. Fair enough, fair point, but in my eyes, reading between the lines and through the lines, . . . the Ukrainian media is at least as guilty of fakes.”

“All media in Ukraine is divided between those oligarch groups [which run Ukraine]; . . . the third most popular channel of course belongs to the present president, Petro Poroshenko. . . . When the media is in the hands of big business groups you cannot call this an independent media. It is not only the Russian media, which is biased . . . but Ukrainian media is also not a saint.”

“There is a silver lining: those groups are actually competing among themselves and you do get a variety of views. . . . Secondly, there are an amazing number of start-ups in Ukraine . . . and influential media based online that are streamed live.”

Linnik added another side of the argument:

“This democratisation of journalism – I don’t think it’s doing it’s job. On the one hand, yes, you get this tremendous variety of sources, on the other hand, you’ve got amateurs doing that and you’ve got dishonest people as well . . . on both . . . all sides.”

“For Poroshenko it is extremely hypocritical and a huge conflict of interest. . . . A president should not have any business assets and if he lives by the values that he declares he should get rid of those assets.”

Fedchenko said of the future role the media has to play in Ukrainian democracy:

“Expectations are really very high but there is one huge difference between what we have now and what we had before that huge accountability of politicians. Huge control from the side of journalists about what happens in politics throughout.”

Watch and listen to the full discussion below: