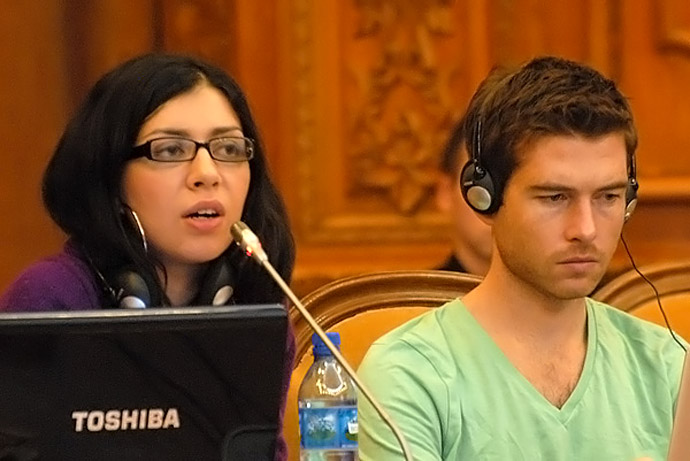 After having literally just walked in the door after attending the first-ever World Blogging Forum in Bucharest, Romania, one of the main highlights to reflect on was the presence of Parvana Persiani, even if only for one day. A delightful person who warmed the hearts of many even before her presentation on the case of Adnan Hajizade and Emin Milli in Baku, Azerbaijan. Persiani is on the executive board of the OL! Azerbaijani youth movement, an incredibly impressive and inspiration group and also the girlfriend of one of the two detained – now sentenced – video bloggers.

Ironically, the day after her presentation on the fate of both Hajizade and his colleague Emin Milli, both men were sentenced to 2 and 2.5 years imprisonment for “hooliganism” respectively, a charge few consider genuine and which most consider to be just another attempt to silence dissent in the oil-rich country. Hajizade and Milli had been exemplary in their use of new media tools to promote a message of non-violence, tolerance and modernity.

Persiani was actually convinced sentence would be passed on the day it was, especially after a last minute rescheduling of the case to morning. Previous trials, she argued, had been started in the afternoon so as not to allow enough time to continue. She appears to be right, and although few also expected the two men to be released, even with international outcry at the case, the news nonetheless came as a shock for many of their supporters.

The World Blogging Forum also issued a preliminary statement and is currently drafting a final, stronger one while everyone from the OSCE to Reporters Without Borders and others have expressed their outrage at what is considered to be a politically motivated trial. Freedom House says that the sentence now threatens the development of new media in Azerbaijan while Amnesty International has since declared Hajizade and Milli to be prisoners of conscience. A day before what turned out to be the final court hearing, I interviewed Persiani on the trial for Global Voices Online on Nokia N82.

A friendly and pleasant person, our thoughts should be with her, Hajizade, Milli and their supporters, families and friends worldwide. Meanwhile, full coverage of the detention, trial and imprisonment of Adnan Hajizade and Emin Milli is available in the Azerbaijan section of Global Voices Online and on the OL! Blog (in English and Azeri). The hashtag #EminAdnan is also used on Twitter.