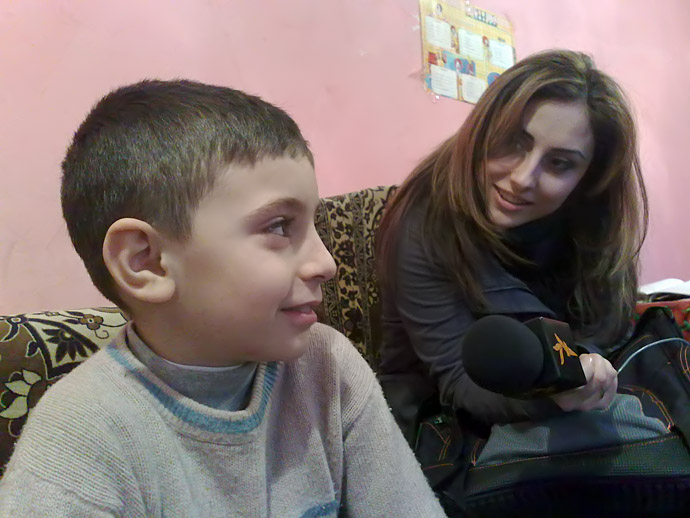 Tbilisi, the Georgian capital, seems to be attracting me a lot these days and not least because it’s the only place in the South Caucasus where Armenians and Azerbaijanis can meet. With a peace deal between Armenia and Azerbaijan as elusive as ever, and with some still expecting a new war within the next five years, it’s also the only country in the region where ethnic Armenians and Azeris live side by side without problems. In contrast, Armenia and Azerbaijan, and especially the former, are less diverse since the tit-for-tat expulsion of their Azeri and Armenian populations respectively.

So, when the Armenia Country Director of the Institute for War & Peace Reporting (IWPR), Seda Muradyan, asked if I’d be interested in training young journalists from Armenia and Azerbaijan in Tbilisi I jumped at the chance. The last time I was in Georgia was in December for the second phase of a personal project to report on positive examples of ethnic Armenians and Azeris co-existing together. Not surprisingly, many more examples of the same were encountered by participants of the seminar despite the totally contradictory situation in Armenia and Azerbaijan proper.

Monitoring results of media sources in Armenia and Azerbaijan document how inaccuracies in articles published by the  leading newspapers in both countries “don’t add any new or necessary information, but rather [they] set a negative context in the public consciousness, which hinders dialogue and mutual understanding.”  Without more accurate and unbiased information about the other free of negative rhetoric and stereotypes, Armenians and Azerbaijanis will continue to see themselves as enemies without any common ground. link

Incidentally, talking of the project, Transitions Online also published another article on the possible role of new media in conflict transformation. It’s a drop in the ocean, but nearly 16 years after the 1994 ceasefire, and with bias and negative stereotyping in the local media still of considerable concern, it’s about time other attempts were made to bring the two peoples together. Somewhat alarmingly, for example, one Western diplomat lamented a little over a week ago that many of those opposed to a concessionary peace deal were those funded to supposedly work towards it.

This is the fourth in a series of reports on relations between ethnic Azeris and Armenians that belie the tension between the two countries. Previous multimedia reports focused on villages and urban districts in Georgia where Azeris and Armenians co-exist. In this analysis Onnik Krikorian explores how new media tools could foster ties between the two groups. You can learn more about this project and see more photos and video at TOL’s Steady State blog. link

Ironically, a meeting was held just a few days before by the Eurasia Partnership Foundation to tackle the problem of bias in the Armenian and Azerbaijani media as it pertains to the Nagorno Karabakh conflict. However, it is doubtful that the media will regulate itself until alternative voices — or the ‘middle media’ that former BBC and Al Jazeera English journalist David Brewer talks about — forces them too. And, with some believing that war clouds are gathering on the horizon, perhaps it’s about time that this happens sooner rather than later.