The other day, Dave Lee pointed out that Sky were doing something interesting with a Twitter feed during their coverage of the Iraq Inquiry.

They were showing foreign correspondent Tim Marshall’s Twitter feed alongside the live coverage of the Inquiry. At this particular point in time, Sir John Scarlett was being asked about the intelligence dossier prepared by the Joint Intelligence Committee on Iraq’s WMD programme.

Marshall was reporting what Scarlett was saying and providing his own commentary on Scarlett’s answers. He was careful to distinguish between the two.

Occasionally, I wondered whether Marshall wouldn’t have been better employed as part of the Inquiry or what would have happened if some of his tweets could have been streamed onto a wall behind the heads of Chilcott’s team. Might have spiced things up a bit.

In (the gaping chasm) between these thoughts, I saved a few screenshots: 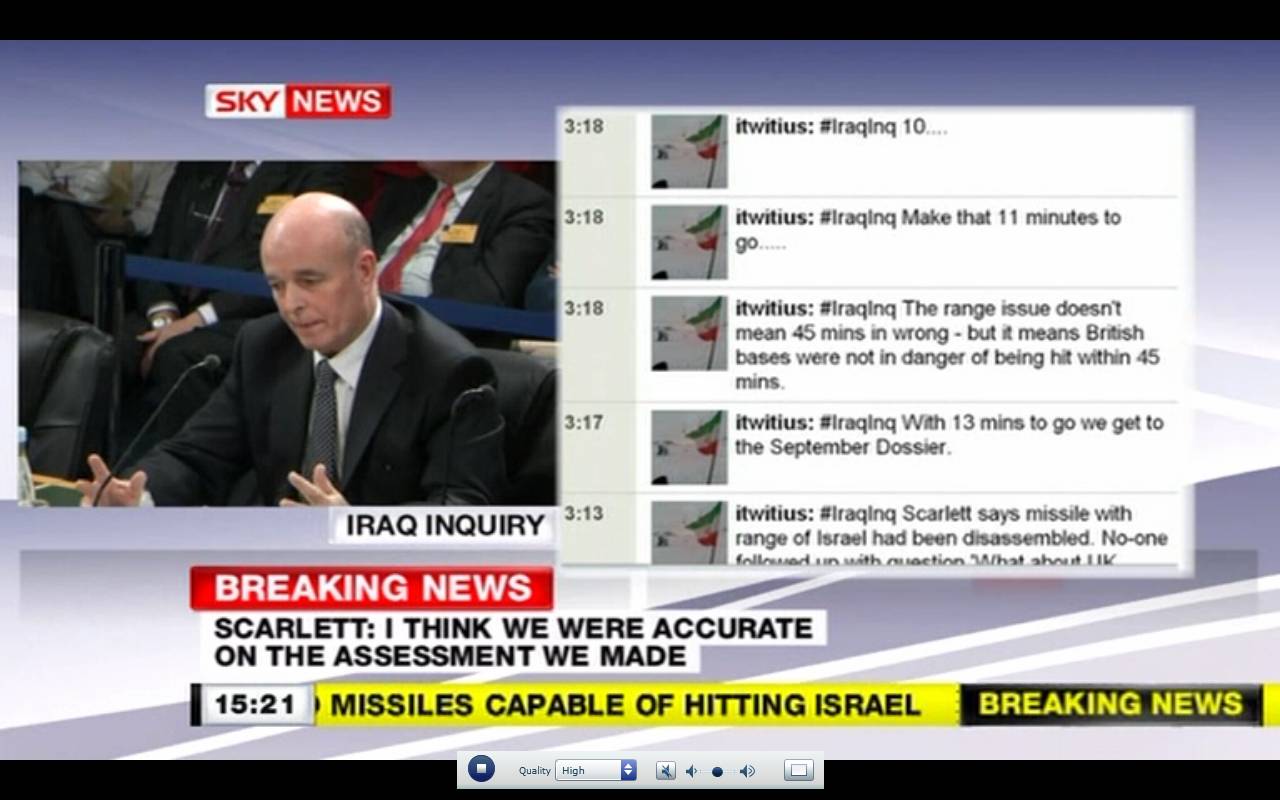 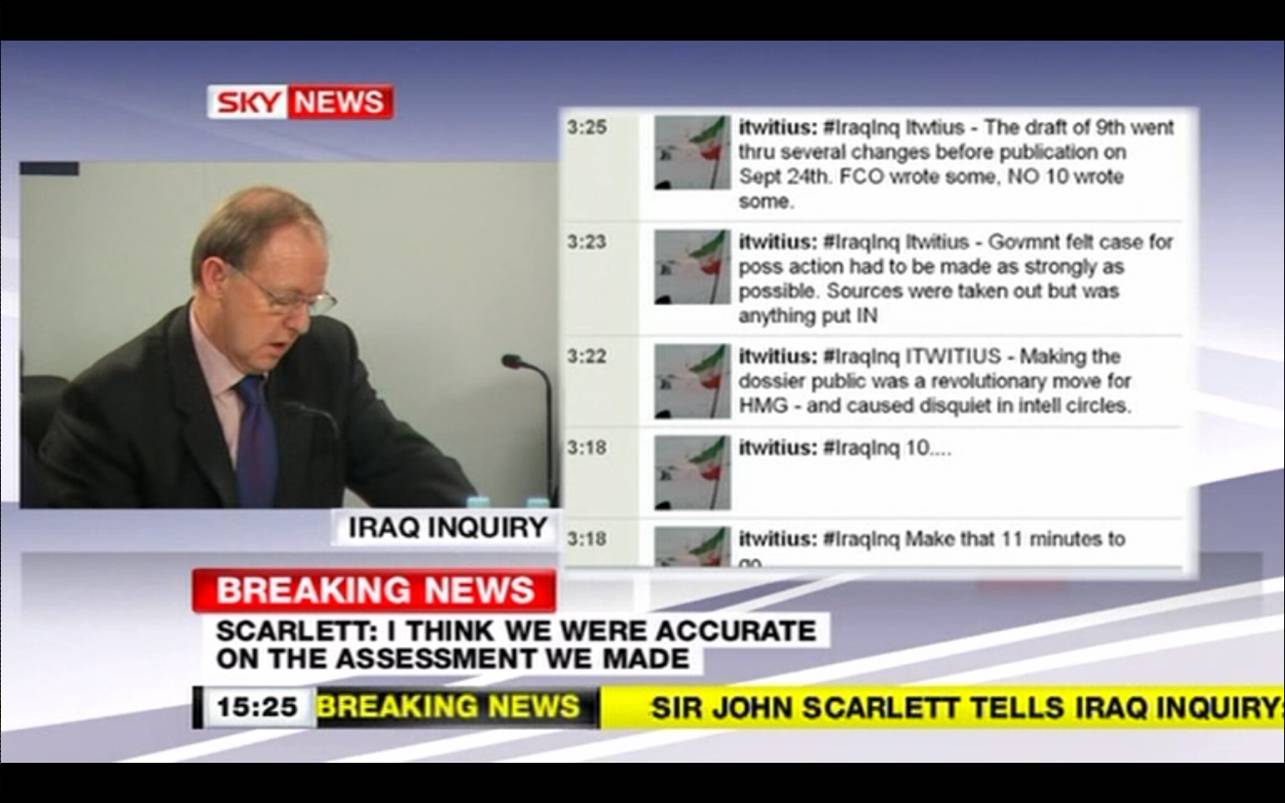 Of course, the tweets were also appearing on Tim Marshall’s Twitter page and it seems they were being fed into a live blog page a little bit like this one. 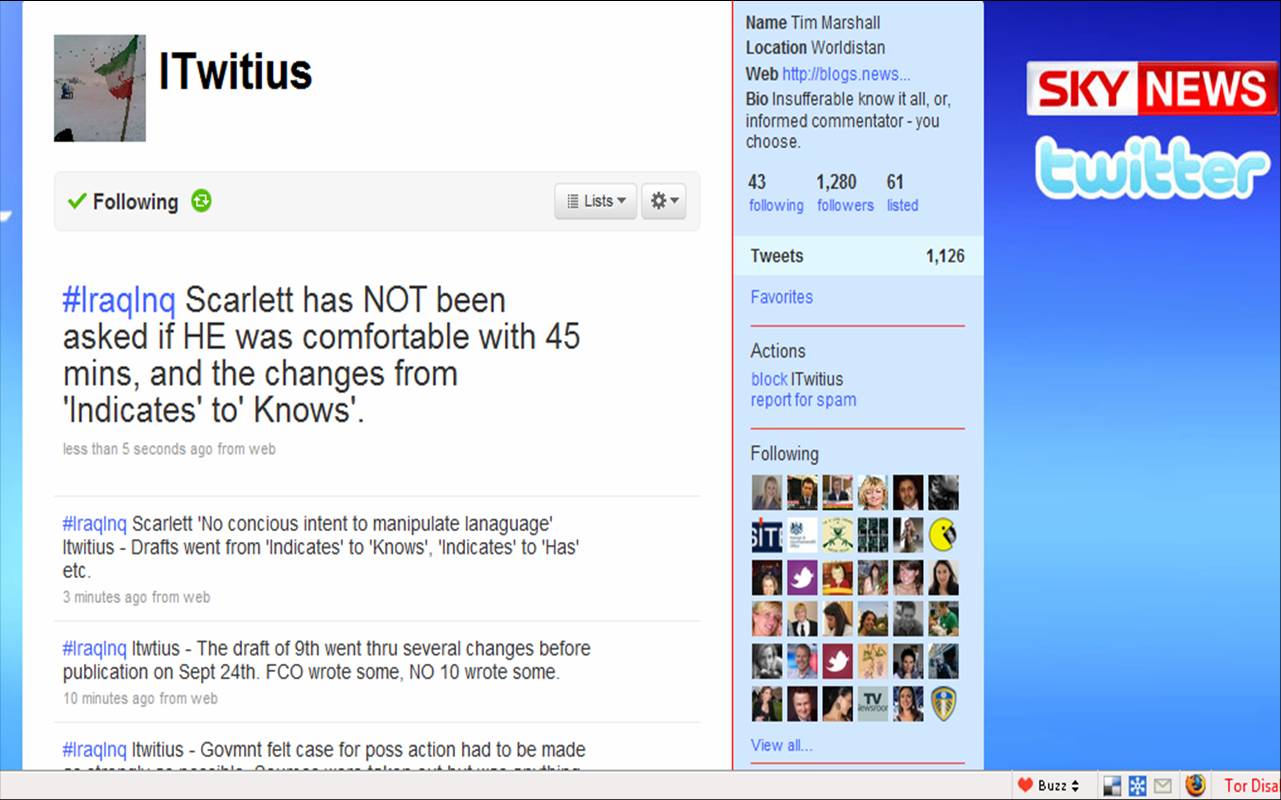 It was certainly an interesting experiment.

As somebody who joined mid-stream (as it were) I was struck that I would have been pretty confused if I did not know that ITwitius was Tim Marshall’s Twitter account. This perhaps states a case for some kind of ‘official blatantly obvious Twitter account’ for this purpose like @SkyForeignCorrespondent (OK, bit long but you get the picture). Even @TimMarshall might have helped.

But you could also get round the problem by having a box on screen that tells you that information – as it was there was no explanation of who was writing these updates. I can imagine some people wondering what on earth ITwitius was or is. (I assume somebody did explain this at the beginning but like I say not all your viewers are joining at the beginning).

Obviously, this soon became clear when Sky went back to the studio for a two-way with Marshall where he gave his thoughts on Scarlett’s evidence mentioning his own Twitter commentary.

This aspect was interesting in itself. Of course, Marshall’s Twitter updates were essentially his notes divided up into 140 character segments. At one point, Marshall referred to them to remind himself of an extra point he wanted to make.  Where previously these would have been written on a piece of paper, here they became part of Sky’s journalistic content as well.

IraqInquiryBlog – Run by the Channel 4 news team. Regularly overtweeting and having to beg for a fresh allowance of Twitter updates from the 140 character messaging gods.

IraqInquirydgst – Run by the Iraq Inquiry Digest, under the leadership of Chris Ames.