Twenty Years of War Reporting: “A good moment for us is often the worst for them”

Jeremy Bowen, BBC Middle East editor and winner of the award in 2009 for reporting on the aftermath of the 2009 Gaza War for BBC1’s Panorama. He accompanied a doctor from Gaza who lost several daughters and a niece in an Israeli shelling, the terrible irony being that he had spent a lot of his career working for peace with Israel:

“I went around the room and he told me where they were laying. I thought that if I’d put it in a more factual manner, it would have more impact. It worked out in that sense but as ever, one of the ambivalences [of war reporting] is that we report on the back of someone else’s tragedy.”

Christina Lamb, author and journalist with The Sunday Times and winner of the award in 2009, read from Mission Impossible, an account of her time as an embedded journalist with the British military in Afghanistan. Mentioning the Green Book that requires reporters to have their copy pre-approved by military press officers, Lamb reflected:

“There’s a fine line between that and censorship. We [journalists] failed because we should have gotten up against it, all of us.” 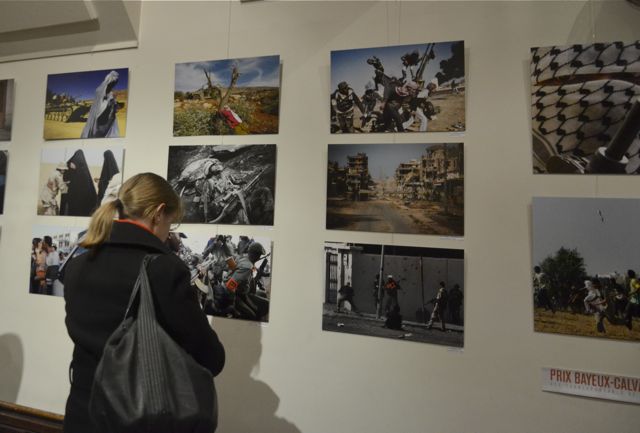 Neil Connery, correspondent for ITV News and winner of the award in 2006, pointed the discussion towards the challenge of providing safety for locals:

“The vast majority of people involved in news-gathering who are injured or killed are locals to that country. They’re not only journalists, but drivers, translators. . . . We as an industry have a huge moral responsibility for those people and I wonder whether we really deliver that as much as we need to.”

Adrien Jaulmes, reporter with Le Figaro and winner of the Bayeux-Calvados award in 2007, he said of reporting in Syria:

“Your moral duty is to share the dangers while you’re there. Journalists suddenly become the targets in big cities because they have money, and that changed the game for us within weeks.”

Watch and listen back here: