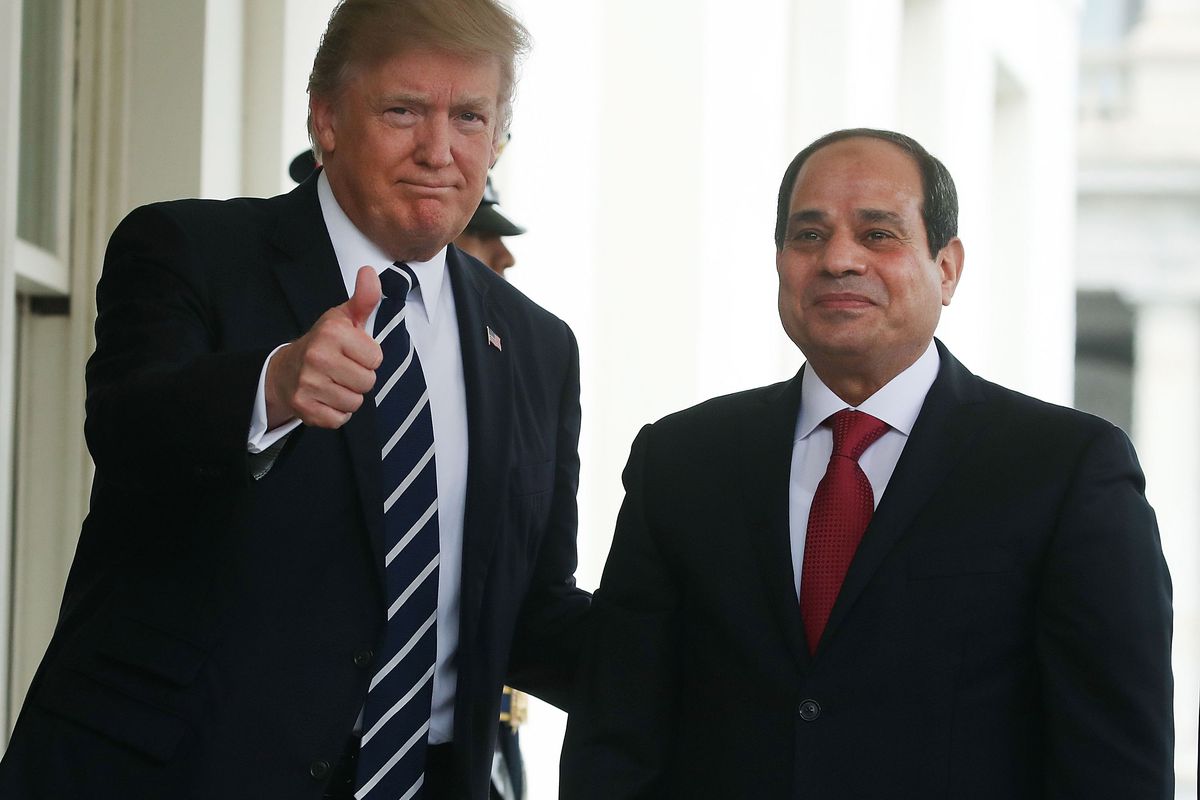 Trump, Sisi and the Muslim Brotherhood

Earlier this spring, Whitehouse spokeswoman Sarah Sanders declared the Trump administration would move to designate the Muslim Brotherhood as a terrorist organisation. The designation, if successful, could impact millions in Egypt and throughout the region. To discuss the fallout, journalist and author Azadeh Moaveni is joined by New York Times correspondent David Kirkpatrick, professor Madawi al Rasheed and activist Mina Thabit.

As early as Trump’s foreign policy overtures in 2017, then National Security Adviser Michael Flynn led a faction in support of listing the Brotherhood as foreign terrorist organisation by the State Department and the U.S. Treasury. Following his sacking and other legal setbacks, the initial proposal fell by the wayside, as more pragmatic voices prevailed in the executive branch.

When an emboldened General Abdel-fattah Sisi visited the White House in April, he found more sympathetic ears to bend. Cue John Bolton, Trump’s fourth adviser on National Security – and a President plea bargaining for Egyptian support in his plans for peace between Israel and Palestine. For Sisi, the designation would represent another nail in the coffin of his political opponents, Egypt’s Brotherhood Islamists.

If the U.S. goes ahead, the impact could be huge. Economic and travel sanctions would follow for entities and individuals even loosely based with the multi-faceted organisation. Strategic allies in the region that share legislative and ideological ties with the Muslim Brotherhood – such as Tunisia and Turkey – would be affected and angered by the move. What would be the impact on now dormant Brotherhood members in Egypt? Would a failed designation embolden or revitalise Brotherhood-affiliated political forces throughout the Middle East and North Africa?

Azadeh Moaveni is a former Middle East correspondent for Time Magazine, based in Cairo and Tehran, and has written three books on Iran. She is the author of the forthcoming Guest House for Young Widows, about the women of ISIS, and now does gender and conflict analysis for the International Crisis Group.

David D. Kirkpatrick is an international correspondent based in the London bureau of the New York Times. From the beginning of 2011 through the end of 2015 he was the Cairo bureau chief. In 2018, David’s book Into the Hands of the Soldiers: Freedom and Chaos in Egypt and the Middle East was received to international acclaim.

Madawi Al-Rasheed is Visiting Professor at the Middle East Centre, London School of Economics. Previously she was Professor of Social Anthropology at King’s College, London and Visiting Research Professor at the Middle East Institute, National University of Singapore. Her research focuses on history, society, religion and politics in Saudi Arabia and the Gulf, Middle Eastern Christian minorities in Britain, Arab migration, Islamist movements, state and gender relations, and Islamic modernism. You can read about her publications here.

Mina Thabet is an Egyptian researcher, activist and a human rights defender who is based in London since 2017. Currently, he works as the head of Policy Unite at the Egyptian Commission for Rights and Freedoms (ECRF), an Egyptian award-winning mainstream human rights NGO. His work focuses on freedom of religion and belief, discrimination and sectarian violence against minorities in Egypt. Also, he co-founded two of Egypt’s most prominent youth movements that promoted the rights of religious and ethnic minorities in post-Mubarak era, Maspero Youth Union (MYU) and the Egyptian Coalition for Minorities (ECM).