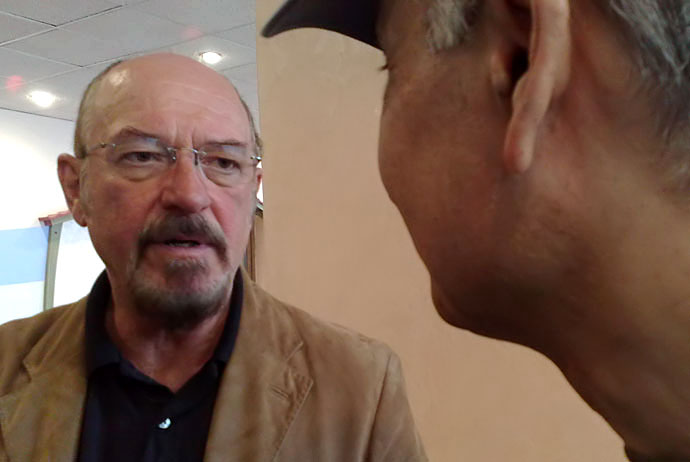 Living in Armenia can be nothing if not bizarre, and just when you thought you’ve seen it all, something happens to remind you that in a former Soviet republic it’s always best to expect the unexpected. Who would have thought, for example, that the Armenian prime minister, Tigran Sargsyan, would be such a huge fan of the legendary British folk-rock band Jethro Tull? Well, he is, and to such an extent that he’s believed to have the largest collection of bootleg as well as original albums by the band in the region. Hell, who knows? Perhaps in the entire former Soviet Union.

So, when rumors started to circulate that the band would perform in Yerevan, they were not to be dismissed out of hand, especially as some big name acts have already performed in the South Caucasus. Thankfully, I missed out on Bryan Adams’ somewhat pretentious sounding peace concert staged in Georiga a month after last year’s war with Russia, but I wouldn’t have minded seeing Shakira shake her thang in Tbilisi’s Rike Square at the end of 2007. Reuters reported that the singer was paid between $1-3 million for the show.

Of course, nobody expected anything on such a scale to be possible here as even Armenian-American rock band System of a Down haven’t played in Yerevan. Rumor has it that their record label didn’t consider such a gig profitable enough to put on, while the band themselves were reported to have been interested if it could be guaranteed that a large number of fans from neighbouring countries such as Turkey would attend. Obviously, such guarantees were not forthcoming, and nor was the band. Nevertheless, SOAD have visited the country and met with local rock bands.

However, costing just tens of thousands of dollars to have perform rather than hundreds, bands such as Jethro Tull are a very real possibility, and especially when key figures in the Armenian government are among their biggest fans. Ironically, prime ministerial duties in the form of a visit to Kazakhstan actually meant that Sargsyan wasn’t in the country when Jethro Tull arrived with many suspecting he would miss the opportunity to see his idols play live. But, once a Tull-head always a Tull-head, I suppose, and where there’s a will there’s always a way, as one friend literally just wrote to me a few minutes ago:

He actually managed to get back for the end of the gig. He must have gone hell for leather out of Almaty…

Of course, being more reasonably priced than other bands isn’t necessarily an indication of lower quality. Indeed, as a Jethro Tull fan in my younger years, it was nice to see the local rock scene being given the chance to check out a quality act who are still touring forty years after they were formed. True, Deep Purple frontman Ian Gillan had performed in Armenia in the early 1990s, but since then there’s been nothing of any real note. So, when I was invited to the reception for Jethro Tull thrown by the British Embassy in Yerevan I jumped at the chance.

Besides, it would make a welcome change from predictable elections, poverty, conflict resolution and the continuing controversy surrounding the recent Eurovision Song Contest which might just have brought Armenia and Azerbaijan closer to war than they’ve ever been in the past 15 years since the 1994 ceasefire. It also gave me a chance to once again put the Nokia N82 through its paces covering the event and holding two brief video interviews with Jethro Tull frontman Ian Anderson and British Embassy Deputy Head of Mission Gideon Dewhirst.

Now, if only I could learn not to ask dumb questions…