On the fourth anniversary of their death, an audience full of friends, family, colleagues and admirers remembered photographers Tim Hetherington and Chris Hondros, with a reflection on their groundbreaking work, and a showcase of the work of others that they have inspired. 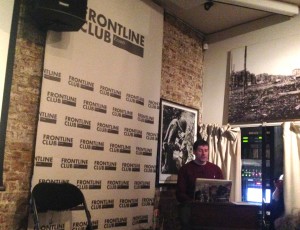 Stephen Mayes, executive director of the Tim Hetherington Trust, introduced the evening with the precursor: “In the spirit of Tim and Chris, we want tonight to be looking at growing and going forwards.”

Daniel Meadows, Tim’s teacher at Cardiff University, shared stories of the years he taught him at university, and explained that even from the start Tim was pushing the boundaries of multimedia storytelling. Playing the incredibly evocative ‘House of Pain’, a video of stills from a night Tim spent following staff at Monmouth Hospital A&E, Meadows painted the picture of a photojournalist whose work and ethos would go on to have a tremendous impact.

Self-styled ‘story-breaker’ Topaz Adizes then showcased his award-winning interactive documentary ‘The And’, and described the influence Tim had on him to break down and re-mould the traditional forms of photography and documentary.

Topaz Adizes discusses his multimedia project ‘The And’

Geoff Johnston, an artist and curator who shared a studio with Tim, shared with the audience some touching raw footage of Tim being interviewed by one of Johnston’s students about his project with a blind school in Sierra Leone after the civil war.

“I wanted to explore imagery and communication ideas, but I also wanted to explore the idea of war. In the project, you think you are in a very sweet story about the blind. But then in the middle of the story, this hammer comes down, and this kid starts talking about how he is blind because he had hot plastic dripped into his eyes during the war,” said Tim in the video.

Tim Hetherington’s legacy of experimental story-telling continues on with the introduction of the Tim Hetherington Trust Visionary Award, won this year by filmmaking team Eline Jongsman and Kel O’Neill, who joined the audience via video-link.

Each of the speakers shared their private memories with the audience, in an evening that celebrated Tim and Chris’s work and the legacy that succeeds them.

“This is a bitter sweet day,” said Aidan Sullivan, showing a video of Chris Hondros’ prolific work in war zones. As the audio recording of Chris’ voice said in the background: “I think you need a little bit of distance from these events [war]. History will decide which pictures endure.”

Watch and listen back: