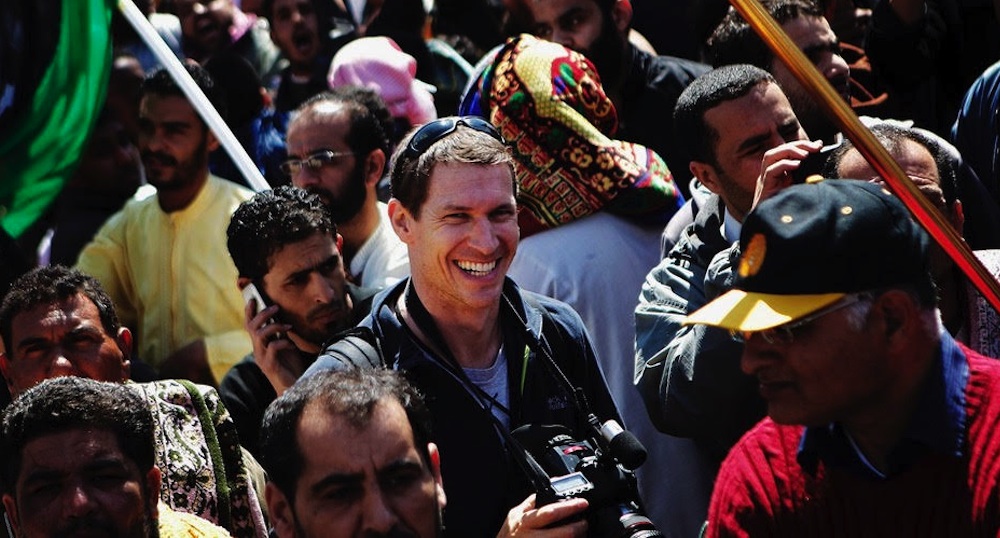 The Hetherington family and the Tim Hetherington Trust invite friends, colleagues and everyone interested in Tim’s extraordinary life to spend an evening at The Frontline Club exploring his dynamic legacy through the work of artists and journalists who continue to expand his innovative approach to visual media. The evening will introduce new work by some familiar friends, as well as some hitherto unknown voices who are bringing fresh energy to today’s media. This evening the Tim Hetherington Trust will announce the recipient of the third VISIONARY AWARD, and give updates on the progress of previous awards.

The ever-increasing presence of visual images in every aspect of our lives signals a new relationship with photography. Visual communication is no longer the exclusive preserve of professionals with technical skill, privileged access and mystical vision. We are all photographers now and imagery flows between us as easily as conversation, and meaning can be found in even the smallest details of otherwise unremarked lives. Tim Hetherington put this at the core of his mission as he traveled the world and worked to find ever more effective ways to share the wisdom he found:

“I want to record world events, big History told in the form of a small history, the personal perspective that gives my life meaning and significance.”

This evening will gather friends and colleagues who worked with Tim to develop storytelling strategies, and discuss how these ideas have developed and evolved with new imagination in the years since.

Ged Naughton was one of Tim’s first professional collaborators in Africa 1999. Together they started to document amateur Liberian soccer in a project that evolved into “Healing Sport” that Tim published in 2002. Ged discusses the ethical issues they faced and shares rarely seen footage and stills by Tim from this time.

Nusee Cooper was a player with the Millennium Stars Liberian soccer team and provides a sharp counterpoint to Ged & Tim’s narrative about sport as a metaphor for the larger issues facing West Africa at the turn of the Century.

David Snider introduces the short documentary that he produced in 2002 in which Tim describes his “Trojan horse” strategy in Healing Sport that harnessed the story of amateur sports players to represent some unpalatable realities about conflict and its consequences.

James Hopkirk brings the evening up to date having recently completed his MFA in photography at LLC.  James is making a deep study of local politics in South London as a means to explore issues of national significance through the lives of Lambeth citizens.

Liza Faktor,, co-founder of Screen will talk about transmedia approaches to documentary storytelling and in the process deliver an update on the project she’s producing (or collaborating on) with the 2016 Visionary Awardee Dominic Bracco II