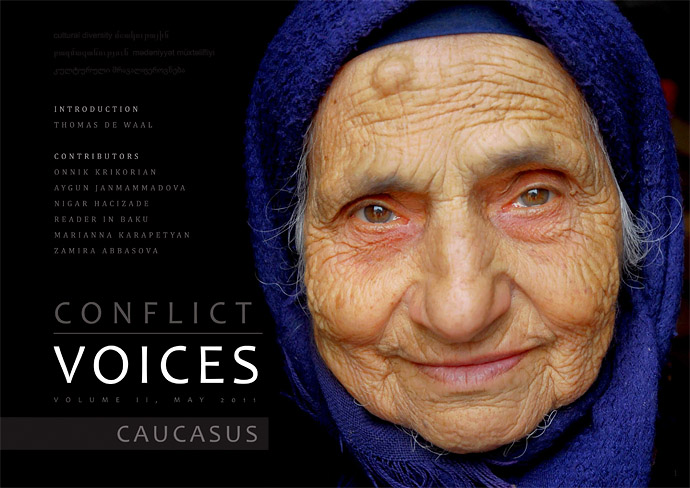 Caucasus Conflict Voices is a voluntary grassroots initiative to amplify alternative views on the conflict between Armenia and Azerbaijan over the disputed territory of Nagorno Karabakh. Today marks the 17th anniversary of the 1994 ceasefire, but both sides are as far away as ever from signing a permanent peace deal. Marking the anniversary, the second edition of Caucasus Conflict Voices is now available for browsing online or downloading.

It also features an introduction by Thomas de Waal, senior associate in the Russia and Eurasia Program at the Carnegie Endowment and author of Black Garden: Armenia and Azerbaijan through Peace and War, calling for a third narrative in the conflict — a narrative of peace.

Anyone who works with the conflicts of the Caucasus learns to live with contradiction. If you watch state media in Armenia or Azerbaijan or hear some politicians speak, you could believe that these two nations are implacable enemies on the verge of war. One Azerbaijani friend told me that nowadays whenever he hears the word "fascist" he expects to hear the word "Armenian" attached to it. In many ways the modern identities of independent Armenia and Azerbaijan and of the small statelet of Nagorny Karabakh are defined by rejection and hatred of the other.

Yet as soon as you probe deeper strange things start to happen and this picture begins to blur. A long conversation with an Azerbaijani about how terrible the Armenians are ends with the admission that his grandmother was actually…Armenian. A Karabakh Armenian talks about the crimes of the Azerbaijanis and then casually lets slip that he had Azeri friends at school and still remembers a lot of the language.

Move outside the conflict zone and these hidden signs of compatibility come out into the open. In the territory of Georgia, Armenian and Azeri villagers live side by side. There is trade and even inter-marriage. Armenians and Azerbaijanis often prefer to do business with each other than with Georgians.

We hear far too little of what I call this "third narrative" of the Armenian-Azerbaijani conflict, a narrative of peace. It spins the idea that the two peoples are capable of getting along fine, have lived together in the past and, if politicians are able to overcome differences on the Karabakh conflict, can live together in the future. International mediators are too timid to speak this narrative or feel that it is not their business. The media in both countries suppresses it.

This is why I congratulate Onnik Krikorian for the work he has done over the past few years, both in print and in images, and which is published here. He has given a voice to these alternative points of view and given a vivid picture of the different and much more positive Armenian-Azerbaijani reality that still exists in ordinary people and in Georgia.

Look at these pictures and descriptions of villages such as Tekali and you see that the problem there is not ethnic incompatibility or historical injustice, but poverty — poverty that will have a much better chance of being fixed if the Karabakh conflict can be overcome and money can be diverted from buying expensive weapons. It is a totally different and refreshing approach and he has done it pretty much by himself.

Send this collection to anyone who thinks they understand the Armenian-Azerbaijani conflict and be pleasantly surprised by their reaction.

Thomas de Waal is a senior associate in the Russia and Eurasia Program at the Carnegie Endowment. he is also the author of Black Garden: Armenia and Azerbaijan through Peace and War. link

Articles, opinions and photos are available on the latest edition of Caucasus Conflict Voices here or for browsing below.