This week at the Frontline Club: Ctrl Alt Delete, How Politics and the Media Crashed our Democracy

Politics can’t keep up with the media; ‘it now moves at the speed of electrons, but politics is still dragging its feet moving at the speed of elections’. On Tuesday night, Tom Baldwin discussed the origins of the current democratic ‘crisis’ in which the world now finds itself, partially, as Baldwin argues, as a result of the rapid progression the mass media has made since the turn of the century. From Facebook to the BBC, from Boris Johnson to Donald Trump, Baldwin; interviewed by Adam Boulton (editor-at-large at Sky News), shares his worries and solutions with regards to democracy and the media, and whether we can ‘reboot our democracy’ while avoiding ‘kick(ing) the power supply out all together’.

The club was bustling and the room quickly filled with guests. Boulton’s dry humour kicked off the night as he introduced Tom Baldwin and his new book ‘Ctrl Alt Delete, How Politics and the Media Crashed our Democracy’; ‘he’s just written this book, basically about everything’s he done wrong’. 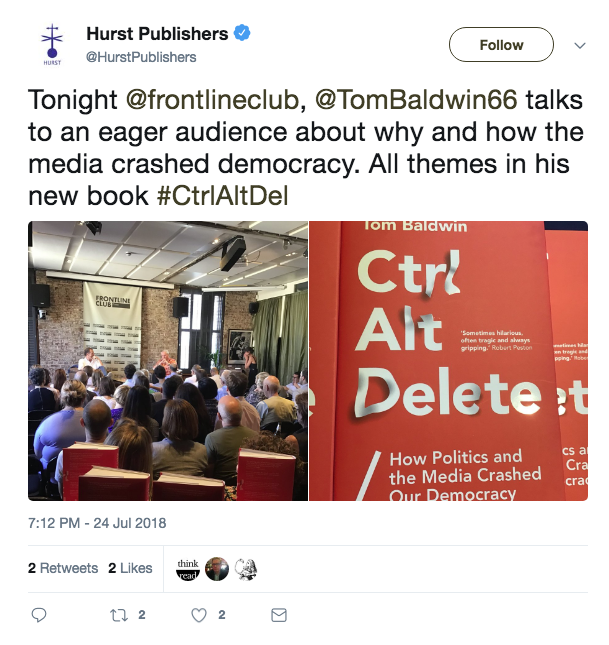 When asked; ‘did it start with America?’ Baldwin responds; ‘I think it started to go wrong just at the point when we were most optimistic about democracy’. The ‘1989 fall of the Berlin wall’, the ‘end of apartheid in South Africa’, ‘information moving seamlessly across borders’. It was ‘precisely at that (optimistic) moment when the seeds of this current crisis were planted.’

Baldwin went on to discuss one of the ‘great blonde charlatans of our age’; Boris Johnson. Starting out in journalism in 1989, the ex foreign secretary ‘invented stories’ about ‘Brussels banning prawn cocktail crisps’ and ‘condoms’; ‘it was part of a debasement of journalism, a debasement of politics which he (Johnson) pioneered’. Johnson’s fabricated stories were likened to ‘chucking rocks over the wall and hearing the crashes on the other side of the North Sea when these stories landed in the Daily Telegraph’. Boulton furthered this; ‘he just thought that sort of mixing truth, anecdote with good stories that happen not to be true was the way to get on in journalism’. ‘In broadsheet terms, no one had done what Boris Johnson had done before’ Baldwin responded; ‘his style of journalism is exactly the same as his style of politics; truth doesn’t matter, resonance does, being funny counts for more than reason’. The theme of dishonesty in journalism has become increasingly apparent, and Baldwin suggested this may be due to media outlets ‘having to fill space with controversy’ and consequently, ‘exhausting the system’.

‘The sheer expansions of news I think did make politics more difficult to do’, Baldwin comments, ‘my former editor at the time James Harding said when he got to the BBC …he was rather taken aback to find out that the BBC was producing 4 seconds of news for every 1 second of the day’. Politics simply cannot keep up with the media while it ‘constantly tries to deal with controversy and drama even when there is no crisis’. Baldwin illustrates this with the Cuban Missile Crisis of 1962. At a time when the world was on the verge of nuclear war, JFK simply addressed America via a televised speech, and ‘afterwards, American broadcast channels went back to scheduled programmes’.

The problem with the media overtaking politics is it can mean ‘people hear the government announcing things but nothing happens so they don’t trust the next time the government announces something’. ‘Communications have speeded up and so political communications speeded up in response’. Baldwin gave the example of prison reform; ‘the government would announce a programme of prison reform, organise a press release …and that would be job done’ …’but to actually get prison reforms through doesn’t take five hours of spin and five hours of TV, it takes years and so the speed with which political news has been communicated is moving faster and faster’. This ultimately culminates in the people’s mistrust in the government, as the electorate cannot see evidence of governmental promises because they are not, and cannot be, fulfilled with the same velocity as the media’s ability to put the original story into the publican domain.

Boulton and Baldwin go on to explore the recent phenomena of social media, and the subsequent rise of the ‘citizen journalist’. ‘The media and politics were locked in this terrible brutal battle for control and as they were doing that in the early years of this century, the ground on which they were fighting was beginning to shake beneath their feet (with the) rise of blogs, user generated content, and online newspaper comments. I do not think politics or the media has adapted very well to this new world’.

News providers have attempted to survive alongside Facebook. However, according to Baldwin, ‘mainstream media just simply can’t beat or find an answer to social media’. Instead they have resulted to ‘a scramble for cheap clicks and shares’, desperately trying to keep up. He gives the infamous story of Jasmine Tridevil, a woman who supposedly ‘had a third breast implanted’. ‘It doesn’t take a great deal of searching to find she has been doing internet hoaxes since 2014’. It was common knowledge that the story was false, however, ‘The Telegraph still ran it because it was viral and it was getting clicks. You have very respectful papers completely distorting their news values and their reputations to live off the digital exhaust of Facebook and Google – this was not a route to profitability, it was a route to survival.’

Boulton moved on to the issue of the political exploitation by major parties of social media with the motive of adding to their electorate. Through tailored advertisement plastered all over social media, political parties are able to show you ‘what you want most, and what works best with your fears and desires… to persuade (you) to vote’. ‘In the 2016 presidential elections, Clinton varied her Facebook advertisement 66,000 times, while Trump varied his 5.9 million times’. Social media is a huge part of the average American’s day to day life, and so it helps to explain how an outsider of the establishment managed to accumulate such huge support. Baldwin comments; ‘there is no regulator on earth, that can deal with that, those ads were being varied through AI and machine learning’. The author went on to argue that the only solution ‘is to ban social media advertising for politics’.

With regards to a solution that could confront the issue of unregulated advertisement on social media; Baldwin states; ‘Good luck Brexit Britain, these are supranational challenges (Facebook, Google) that can only be tackled by supranational bodies such as the EU… leaving is one of the most barking ideas I have ever ever heard’.

Boulton opened up the discussion to the floor. A member of the audience stated that Baldwin ‘appeared to have contempt for the people who voted leave’, and went on to ask; ‘if there was a repeat vote to leave, how would you conduct yourself?’ Baldwin replies; ‘It’s not about contempt for the British people, it’s about respect for them to say they have a democratic right to have their say’. ‘I’m supporting a people’s vote now, not because I want to re-fight that referendum, it’s because of everything that has happened since’, ‘we are now getting a deal and what a mess it is’. Baldwin went on to talk about the £50 billion leaving fee that voters were not aware of, and the infamous Europe money to the NHS broken promise; percussions of the vote that the electorate could not have predicted when they were casting their vote.

Baldwin was then asked; ‘in an age in which success, whether we like it or not, is driven by clicks and sales, perhaps the fault lies with the consumer’ as the consumer pursues ‘entertainment’ over truth. The writer argues that ‘(we) follow who (we) follow and (we) like what (we) like…(we) tend to sort of shut (ourselves) off from other views – that’s a consumer choice’. However, he continues ‘we’re in a third dimension now, which is the algorithms, and that is not a consumer choice, it is a commercial decision by the people running the algorithms’, and so the consumer cannot be fully blamed for this new phase in news coverage.

Brexit remained a prominent theme, as one of the final questions of the night tackled the reasons why Britain voted to leave. The audience member proposed that ‘to critique is easier than to construct’ and so the British electorate, fueled with anger, especially from the ‘2008 crisis’, voted Brexit because it ‘allowed them to say f*ck you’ to the government. Baldwin replied; ‘I think we are in danger of agreeing furiously!’

Boulton wrapped up the night, and the audience headed to the bar for drinks.