The Tenth Parallel: Africa’s fault line between Christianity and Islam 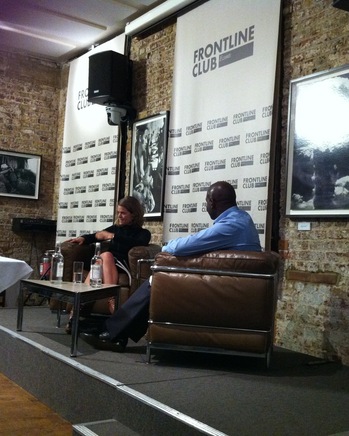 Solomon Mugera, the BBC’s Africa editor began by describing the balance where Islam and Christianity collide as ‘a delicate pendulum’. For the past seven years award-winning journalist and poet Eliza Griswold has travelled 9,000 miles along this line of collision known as the Tenth Parallel, meeting the people living on this divide between North and South, hot and wet, Muslim and Christian; observing how religion plays into their daily lives and why it is a cause of conflict. Starting West in East Nigeria, Sudan, Somalia, Ethiopia and Kenya and then across the Indian Ocean to Indonesia and the Philippines.

Griswold recounted stories of people she had met – speaking of Dr Hawa Adbi a soviet trained gynecologist in Somalia who turned her small family run farm into a refugee camp for 100,000 people.

“She has run this camp for the past 20 years, and just last week, al-Shabaab, the militant group in Somalia came and took part of her land and took thousands of children to rally in the name of al-Qaeda to show that these children supported [them]. Dr Abdi is right now trying to wrestle with holding onto what used to be her own family farm”

Griswold’s study has followed the journey of religion, the routes of Christianity and how Islam has spread further south in Africa. On the reason for conflict Griswold talked of many interrelated factors that must be bought to bear regarding religious conflict.

“I didn’t find one single so called religious conflict that didn’t have a worldly or secular trigger, not one, whether that was a fight over land, oil, water, a political election or even chocolate”

The loss of identity through religion being forced upon people has fractured its routes, radicalising it and twisting it into a form or power often being used politically, turning democracy and politics into a ‘numbers game’.

“National identity was superimposed by a colonial administrator and it never made any sense, so what other forms of identity do make sense? Well it means nothing to be a Nigerian because the nation means very little; nation means even less if you think that government is embezzling between 4 – 8 billion dollars a year, so government is corrupt, not just absent and you have to survive against your government[….] the way in which people ensured their right to mutual survival was through identity”