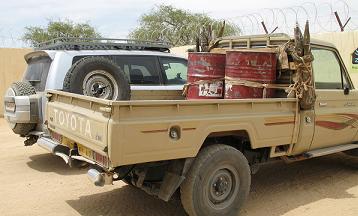 It’s good to know that when I stop off for lunch at my favourite Chadian Chinese restaurant, the Shanghai in Abeche, our armed friends are asked to leave their rocket propelled grenades in the car park.

Tension is being racheted up between Chad and Sudan. First Chadian rebels, backed by Sudan, launched an attack to the south of Abeche. That came just as Sudan and Chad were due to sign a deal agreeing not to support each other’s rebels. Then, in the past 24 hours, Chadian war planes have been bombing rebel targets over the border in Sudan.

Now we just have to wait and see whether Sudan decides to strike back, maybe at Darfur rebels who have their rear bases in Chad. Whatever happens it’s not looking good.