With the ‘biggest leak of military documents ever’, Wikileaks has reestablished its position as the pentagon’s no1 hate object. In a special four-page report, FRONTLINE discusses the shocking results of the whistle-blower’s collaboration with the Iraq Body Count group and talks to Wikileaks founder Julian Assange about the latest release. 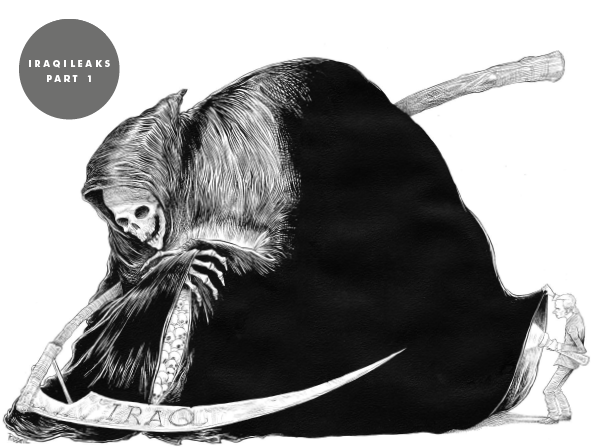 America’s longest war – and Britain’s least popular conflict for a good while – in Afghanistan drags on.
Meanwhile, the war in Iraq mutates into whatever ghastly phase comes next, each country disavowing
further military commitment, cutting and running, while the killing continues. It has been seven years
since President George W Bush proclaimed “mission accomplished” in Iraq, and as many months since Tony Blair insisted to the Chilton enquiry that this carnage was a worthy – almost God-given – mission.

At the time of writing, Britain mourns the execution in Afghanistan of a kidnapped female aid worker
from the Isle of Lewis while American military courts try a “death squad” of soldiers for an alleged rampage of sadistic violence against innocent civilians on a charge sheet that reads like one against a Mexican narco cartel, with victims’ body parts reportedly hacked off as souvenirs – Abu Grahib part two, only this time in secret.

As the wars grind on, so the cacophony of spin, “information” and coded messages from the front
lines and the seats of power intensify. A recent book by Bob Woodward reveals a few of the discordant voices from within the Administration of the president who opposed the conflict in Iraq, but who call that in Afghanistan “the necessary war”. The “sceptics” are apparently led by Vice-President Joe Biden; the Pentagon is itself divided. One faction’s views were expounded in Rolling Stone magazine of all places by General Stanley McChrystal, who was abruptly replaced as commander of the operation by General David Petraeus, who is reported to have ambitions to stand one day as a Republican, Colin Powell-style, against the president who appointed him.

The only thing most in the Administration seem to agree upon is the insufferability of “The Ego Has
Landed”, Richard Holbrooke, President Obama’s special envoy to the region. In Britain, as the appalling traffic jam continues through Wootton Bassett, the last alleged killers of six British red-caps are freed (their quarry left defenceless by the ministry of defence with insufficient ammunition and dodgy radios).

And as in America, both wars are also inherited by an heir to their initiator, in this case Blair, although
the situation along Whitehall is simplified a little by the fact that David Cameron, unlike Obama, was an ardent supporter of them both, though giving little impression of understanding the region then or now.

On the Labour side, though, the victorious Miliboy addresses the conference which eight years ago gave Blair its party-base blessing for the Iraqi invasion to say – hundreds of thousands of lost lives later – “Ooops, sorry”, and is applauded in the front row by Blair acolytes who themselves stridently supported the war – though not by his brother, who considers the carnage in Iraq an “amazing achievement”.

To these voices is now added another – inescapable, and very different: a voice based on solid, often stark, information for once, the biggest channel for leaked documents from the front lines and from inside the war machines of all time: Wikileaks. During the years that followed its foundation in 2006, this was an anonymous voice from cyberspace, speaking across a range of international issues, most of them focussing on leaked documents in Africa. But after last April’s leaks of footage from a helicopter gunship of the killing of two Iraqi journalists from Reuters, with the further deposit online of 76,000 classified “war diaries’ from Afghanistan, the voice took human form here at the Frontline Club. His name was Julian Assange – a former student of quantum mechanics and computer hacker, founder of Wikileaks.

He has become the organisation’s very public but elusive face – a strange dichotomy; he is a media
obsession and bête noir of the Pentagon, either poster boy or whipping boy, depending on which end of the telescope you are looking through. Much of that is irrelevant to the wars in Afghanistan and Iraq:
prospecting about his childhood, reportedly spent on the run with his mother and brother from an abusive step-father; and about recent encounters with two Swedish women that resulted in charges of harassment and/or rape (the Swedish authorities keep changing their minds).

Assange’s most scornful views on the media are in part justified by its treatment of him: his “spectral
white hair, pallid skin, cool eyes” (the New York Times); or “a silver mop of Andy Warhol hair and
bluish pale skin” and a “new status of celebrity, Greek god and international sex symbol” (Globe and
Mail, Canada). You could almost forget the salient fact that this is a man who perplexes and occupies
the time of generals and even President Obama himself. He heads a team accused by Admiral Mike
Mullen, chairman of the US joint chiefs of staff, of having “on their hands the blood of some young
soldier or that of an Afghan family” after making public the names of civilians working with the US
military (a charge Assange denies).

He has, above all, unearthed secrets about Britain’s and America’s wars to such a degree that
Wikileaks is now in a position to pose the question, which Assange does, of whether wars can be fought in secret any more – “our aim is that they cannot”, he says. One could be forgiven for forgetting that there is a damned war on – two of them, in fact. Or as Assange says: “plenty of them’…..

To read the rest of the article please subscribe to the broadsheet.