The Resonance and Peculiarity of Vietnam 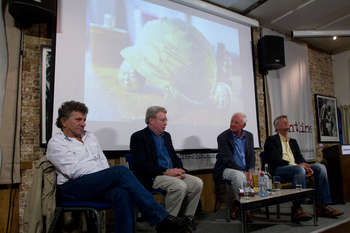 An opening clip from Michael Nicholson’s ITV series, Back to the Front was shown to set the scene for the evening and was followed by our panellists recalling their experiences of Vietnam, from their initial bewilderment of its size and complexity, to their realisation of the graphic carnage around them.

Nicholson then opened the floor to discussion, with highlights of the night including input from fellow reporters and journalists, most notably a former reporter for a Saigon news agency.

Vietnam’s resonance and peculiarity provided continuous stimulation for discussion and with a wealth of experience and memory to call upon, the panellists provided numerous anecdotes and stories of their time in Vietnam, none more entertaining than John Laurence’s recollection of fellow reporter Sean Flynn disassembling a live short-fuse grenade for a group of journalists.

The panellists continued to field insightful questions from the audience, covering the change in the perception of journalists and the power the press had over the public, punctuated with Patrick Chauvel’s insistence that the press made the war end and later that they held power to account by reporting the truth.

But the ease of access that journalists had enjoyed before, Jon Swain noted, changed and where before he was taxied to the war on the frontline in an army helicopter, now a press officer armed with a multi-page declaration would stand in his way.

"There frequently exists a state of war between us [the media] and them [the military]," Nicholson observed in his opening remarks, and Chauvel concurred:

The evening ended with a clip from Chauvel and Antoine Novat’s film Rapporteurs de Guerre. It included an interview with the Life Magazine photographer Larry Burrows, whose helicopter was shot down in Vietnam, summarising the evening aptly:

“So often I wonder whether it is my right to capitalise, as I feel so often, on the grief of others. But then I justify in my own particular thoughts by feeling that if I can contribute little of the feeling of what others are going through then there’s a reason for doing it.

If you were not able to be at the event, you can watch it or listen to the podcast.