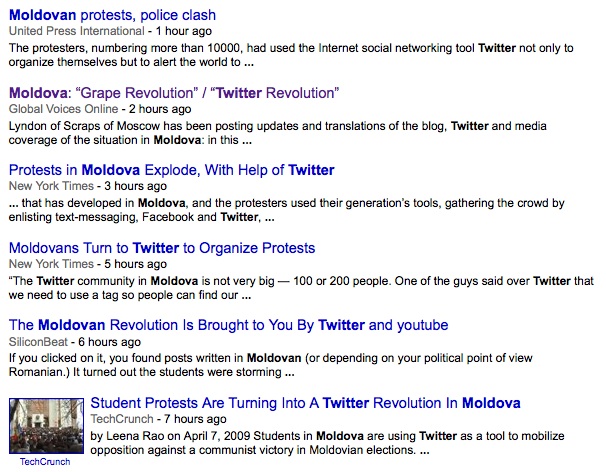 According to the BBC thousands of protesters descended on Moldova’s parliament building yesterday to demonstrate against the Communist Party’s victory in last Sunday’s elections. The protesters are thought to be primarily made up of students and young people who claim the results of the election were fradulent despite being approved by election monitors.

Unsurprisingly you could follow what was happening on Twitter. The key hashtags are #pman (the acronym of Piata Marii Adunari Nationale, the square where the protests were taking place), #Chisinau, and #Moldova.

But a number of commentators claimed that this was the beginnings of the first Twitter revolution and that Twitter had played a "key role in organising the protests".

The Telegraph, for example, jumped straight in with this headline: "Students use Twitter to storm presidency in Moldova". Another Telegraph blog post pointed to this foreign policy piece which claimed that after the Orange Revolution in Ukraine, Twitter "will usher in another revolution in neighbouring Moldova". A TechCrunch post on a similar theme is being retweeted numerous times as I write.

But where’s the evidence? Not many of the people who have actually written these and similar articles have bothered to find some tweets that might hint at some kind of organisational role for Twitter:

But Evgeny Morozov’s foreign policy article notes that "there is little to none cellphone coverage in the square itself…so protesters have to leave it to post updates to Twitter via GPRS technology on their mobiles". This suggests that the organisational role of Twitter was not particularly substantial at the scene of the protest.

Indeed, an eyewitness account by Dorina on Kosmopolito.org outlines how difficult it would have been to use Twitter effectively at the protest itself:

"…It was after this altercations that people in the offices that were trying to access different online media sources had really slow connection or could not access the web pages at all. Later on we understood that internet connections were down, local television did not broadcast and the national public television was broadcasting relaxation shows. Also, after 11.30 AM we could not reach protesters from the Square via their cell phones".

The New York Times has spoken to Mihai Muscovici who said he could provide Twitter updates from Chisinau, the Moldovan capital. But he suggests that the Twitter community in the whole of Moldova is around 100 to 200 strong and there is scant mention of the organisation of the protests at all apart from a rather vague quote the Times has put in at the end of the piece.

But was Twitter used in the original organisational process? It might be worth trying to work out who helped organise the protests in the first place and how they organised it.

A more in depth look at Twitter while reporting on this story might have picked up this LiveJournal blog. The blog belongs to Natalia Morar or Morari, a Moldovan investigative journalist for The New Times, based in Chisinau who was barred from entering Russia in late 2007 and again in 2008. She’s listed as one of the members of ThinkMoldova, an organisation that wants to get young people in Moldova to "directly participate in proposing new ideas and take part in the decisions important for their own future and their country".

And after the elections on Sunday, that’s exactly what Morar and several others set out to do. (I’ve used ‘Google translate’ to help me with her blog in Russian hence accuracy may will not be 100%. If you can help with a more accurate translation please get in touch). Here’s how they organised the ‘youth initiative’ protests according to Morar’s blog:

"Six people.
10 minutes for creativity and action.
A few hours of information on networks, facebook, blogs, SMS to friends and e-mail newsletter.
All of the organization – through the Internet.

Even if Google translate has spectacularly let me down, and she does in fact mention Twitter at all somewhere in this post, I would suggest this was a much wider social media campaign. Morar continues:

"On the street came out 15 thousand young people! See the video yourself. And this is just a few hours of information dissemination, without television or other media.
Our initiative group called "I’m not a communist." It includes several non-governmental organizations – our association and organization ThinkMoldova HydePark. Only the young, and no parties.

Our action team announced April 6, the National day of mourning and called on all young people, disagree with the results of elections in the Moldavian Parliament, to arrive at a monument to Stefan cel Mare and light a candle. The application filed by 50 people. It is 15 thousand. They chanted "Down with communists!", "No censorship", "Better be dead than communist!", "We bring change!" After lighting candles, we went across the column to the presidential administration, and th
en at the national assembly area. Within a few hours of traffic on the main street of Stefan cel Mare was blocked."

She confirmed that on the square "cellular communications" were blocked. Indeed, far from using Twitter she notes that:

"As all has begun to develop quite chaotic, we are immediately on the ground created a youth organization committee and asked all to go away tomorrow, 10:00 am. Today we had one just a megaphone and was difficult to coordinate all actions."

In short, unless you can demonstrate that this blog is not what it seems (possible but looks unlikely to me) or you can find some hard evidence (which may exist) for Twitter’s substantive use in these protests other than the establishment of a hashtag #pnam, I’m not convinced that Twitter played a key organisational role.

As it stands, the Twitter revolution is a myth. What happened, and is still happening, in Moldova is a protest organised using social media.

1. Evgeny Morozov at ForeignPolicy.com seems to have qualified his assessment of Twitter’s role in the Moldovan protests later in the afternoon after his initial ‘Twitter revolution‘ post. Some good points here though.

2. Dumitru, one of the commenters below, states on his blog that:

"The protests in Chisinau have started because young students were unhappy with the elections stolen by the Communist Party. They have organized themselves through blogs, and social networks like Facebook and Odnoklassniki.ru."

In a comment on Evgeny Morozov’s blog Dumitru adds:

"In fact Twitter did not play that big role. The story is quite simple – young and active bloggers decided to have a flash-mob action, lighting candles and "mourning Moldova" because of Communists victory, which nobody recognized due to the multiple violations before and during the campaign. They agreed on the time and place of the action through the network of Moldovan blogs (blogs aggregator blogosfera.md), and social networks like Facebook/Odnoklassniki, etc."