The most dangerous places for journalists 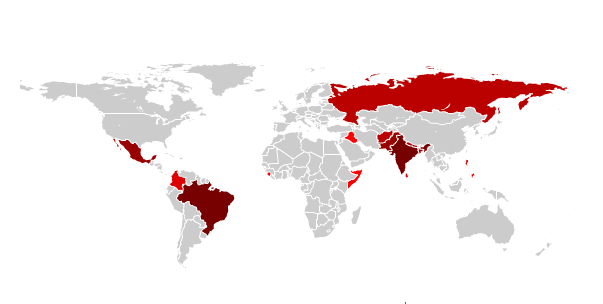 Iraq, Sierra Leone and Somalia are the most dangerous place for journalists according to the 2009 Imupunity index released by the Committee to Protect Journalists today. However, the report entitled Getting Away With Murder 2009, highlights worrying trends in South Asia, particularly in Sri Lanka and Pakistan,

“We’re distressed to see justice worsen in places such as Sri Lanka and Pakistan. Our findings indicate that the failure to solve journalist murders perpetuates further violence against the press,” said Joel Simon, CPJ executive director. “Countries can get off this list of shame only by committing themselves to seeking justice.” link

"The situation in Pakistan is quickly eroding," [said Shawn Crispin, CPJ Asia programme consultant and a former foreign correspondent based in Southeast Asia.] "There are more and more journalists getting caught, not necessarily in the crossfire itself, but by competing groups. They don’t like the coverage of the journalist, they target the journalist." link