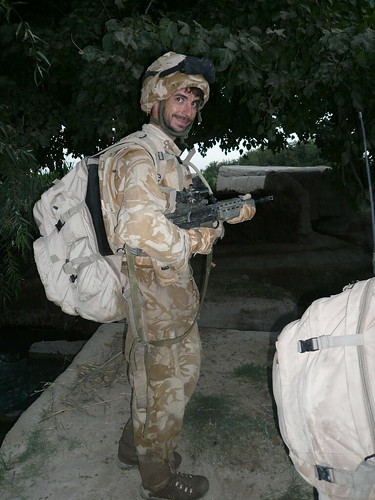 Lieutenant Commander Mike Parr of the Royal Navy has been with me wherever I go in Helmand. I would not have been allowed to come here without a â€œminderâ€.
Mikeâ€™s main job is to make sure that I donâ€™t compromise operational security. To check that I donâ€™t put the soldiers lives at risk by what I write or film. He also helps me get around. He can organise space on transport and knows where I might get the information that I want.
At the beginning of the trip I was told me that he was also here to protect me, so that troops in the field didnâ€™t have to. They should be concentrating on their job, not the visiting journalist.
But he is a Matelot and far from the ocean here. His naval trade is hydrography and meteorology. Afghanistan is a parched and land-locked country. I donâ€™t expect that he will be shooting many Taliban but he tells me that it will be hot and dry tomorrow.
There have only been two areas of difficulty between me the journalist, and Mike the military press-officer: Casualties and prisoners.
The army are clearly concerned by the effect on morale back home on pictures that show British soldiers who have been killed or seriously injured. While it seems reasonable to me that they should want to prevent images coming out before the next of kin have been informed, further restrictions in my view are editorial restraints.
The Geneva Convention prevents the military, from countries that signed up to it, from using Prisoners of War for propaganda purposes. The British Army therefore considers that it is bound by this treaty to do what it can to stop journalists that are with them from recording images of these prisoners.
As an independent video-journalist I think that prisoners are very much part of the story. Matters, such as their welfare, are areas that I would like to follow up, but canâ€™t.