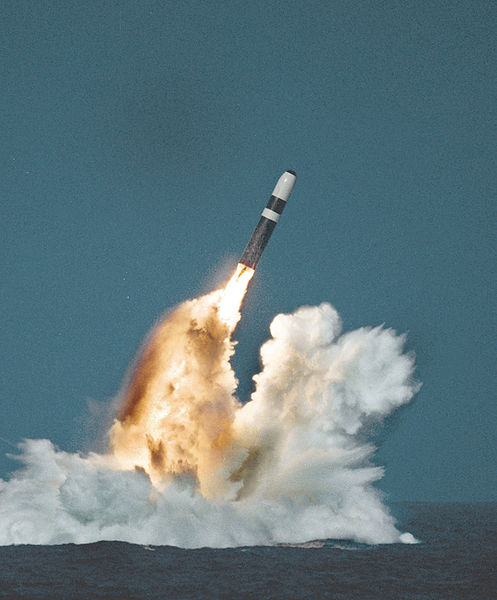 So the Liberal Democrats want to scrap, replace, consider replacing…hang on a minute, let’s find the manifesto…"commit not to replace the Trident nuclear weapons system on a like-for-like basis" if they are voted into office.

And I would be very surprised if the Trident issue fails to make an appearance in tonight’s leaders’ debate. After all, it marks a clear policy distinction; Labour and the Conservatives have both said they would renew Trident.

Or does it? The Liberal Democrats have been at pains to point out that they would not scrap Britain’s independent nuclear deterrent but they have not given much indication of what they might replace it with.

So I thought I’d investigate whether better options than Trident might be available.

Before we get going, it might be worth laying out what the Trident system is and why there is talk of replacing it.

The first of these submarines was launched in 1992 and has a shelf-life of 25 years, although it is hoped it will last until 2022 and possibly longer. Similarly, the Trident missiles would need to be modernised if they are to last beyond 2020. That means decisions have to be taken as to whether Britain should replace the submarines and extend the life of the missiles.

The Government published a White Paper on the issue in 2006. These are the alternatives that were considered and why they were rejected:

This option was rejected "primarily because of vulnerability to pre-emptive attacks" and the procurement cost involved in buying new aircraft. New cruise missiles would also have to be purchased. (Trident missiles are of the ballistic variety).

Housing a weapons system on the UK mainland was also partially ruled out due to their vulnerability to attack. At the risk of stating the obvious the paper noted that silos "are immobile" and "impossible to conceal". Whereas in the US, you can disperse separate silos across thousands of miles, in the UK one nuclear attack could potentially knock out numerous silos all at once. The silos would also be expensive to build.

3. A surface ship with Trident missiles

This option was rejected because a surface ship is easier to locate, track and attack, whether by sea or from the air. A submarine is far more elusive.

This was quickly rejected by the Paper, and apparently also by the Lib Dems although they also say "it cannot be eliminated". Confused? Yes, so am I. The Green Party have said they would dismantle nuclear missiles if you want to vote for outright disarmament.

The overall conclusion was that renewing Trident was by far the most cost-effective option. It is much cheaper than air or land based systems and equivalent in cost to the surface ship option but with better strategic capabilities.

Of course, a government White Paper is unlikely to be the last word on any issue. Which brings us to the Liberal Democrats own paper on the alternatives entitled ‘Policy options for the future of the UK’s nuclear weapons‘, where you might expect to find the cheaper option everybody has been missing clearly spelled out. Unfortunately, I was disappointed.

Here the Liberal Democrats effectively rule out significant changes to the Trident system and instead propose some tweaks. Namely, the possibility of ending continuous at sea deterrent patrols, and using a modified Astute submarine that carries fewer missiles.

There is one proposal – ‘virtual deterrence’ – that would be a clear departure. This would mean the UK would declare that it was still a nuclear weapons state but would "decommission all or a portion of the current Trident system". This seems highly problematic to me. Confusion over whether a country has or hasn’t got nuclear weapons doesn’t seem too helpful. (See Iraq).

In any case, this is all talk and not a commitment to any of these particular paths.

It seems the Liberal Democrats might not actually have formulated any policy that is radically different from Labour and the Conservatives except on one particular point: they just want to talk about Trident in the imminent Strategic Defence Review.

This is Paul Ingram, the Executive Director at the British-American Security Information Council, over at Arms Control Wonk:

"They are looking for a small ask, that the issue be considered within the long-awaited Defence review promised by all major parties contesting the election…Beyond this, don’t expect anything substantial from the Lib Dems, as they will likely be spending what political capital they have after any indecisive election looking for deals on electoral reform."

So a request to Sky News tonight for some clarification: please ask Mr Clegg what he would replace Trident with.

Note: This post will be cross-posted at Talk Issues soon.