The Picture Editor’s View: A Conversation with the Evening Standard’s David Ofield

Chaired by Francis Hodgson, professor in the Culture of Photography at the University of Brighton, the discussion focused on the long and illustrious career of renowned Evening Standard picture editor David Ofield ahead of his retirement.

Ofield joined the Standard in 1987 after a three-year stint on the Daily Star’s picture desk. “Things were very different back then,” Ofield said. “Photographers had no real qualifications and there was no going to university. They started off by freelancing and used to come and pester you while you were working. Security’s much tighter now for one thing.”

Ofield said that much more is demanded of photographers these days, often without the incentive of a bigger fee. “The day rate at the Evening Standard has gone up fractionally over 30 years. We used to pay £150, now it’s just over £200,” he said.

Ofield added that changes in the business had forced out some photographers who refused to adapt to how much faster they were expected to be. “Some photographers couldn’t handle how quick we wanted everything. The backbench sees something happening and they want it as quickly as possible. Put it this way, I used to look at 100 pictures a day. Now it’s more like 50,000,” he said.

The professionalism of photographers is not the only aspect of the business that has changed. As much as Ofield likes to cling to the traditional method of picture editing, he admits he has been forced to embrace the likes of Twitter as a source of pictures. “I really don’t think much of Twitter, but we have used it on a number of occasions. Just last week we found a picture of a young man who had been stabbed on Twitter.” 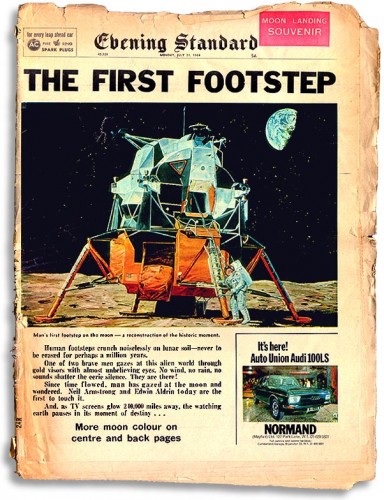 The Evening Standard’s front page graphic of the moon landing

Some things never change, however. When a hole appears in the paper, Ofield is expected to fill it with a photograph. “I used to have a bottom drawer full of animal pictures in case there was a gap in the paper. Now I have a file on my computer.”

Ofield talked about the pressures of the deadline and his methods of picking the best pictures. “I normally come in at 5:30am and sort through thousands of photos.” Ofield said that the editing process was largely down to instinct, adding: “I know a crap picture when I see one.”

When the Evening Standard reported on the Moon landing in 1969, long before Ofield joined the paper, the timing was such that it was impossible for the paper to get a photo of the landing before going to press. Instead they used a graphic and pinned their hopes on a successful landing.

“They printed 1.3 million copies before he even landed – and the editor was told that if it didn’t happen he would be fired,” Ofield said. “It looks pretty real to me,” he insisted, adding that the graphic was better than the real picture, which was just a “grainy old black and white photo.”

Asked by Hodgson what he was most proud of, Ofield said: “I’m proud of getting up at 5am for 30 years, and I’m proud of what the Standard stands for. I can’t remember putting a duff picture in my 30 years at the paper and we haven’t got much wrong, especially nowadays with so many pictures.”