The screening will be followed by a Q&A with award winning Australian filmmaker Eva Orner.

Unique, uplifting and heartbreaking, The Network tells the story of Afghanistan’s first independent television network – TOLO TV – and the people behind it. TOLO TV has grown to be Afghanistan’s largest and most successful television network, employing over 800 Afghans producing news, current affairs, drama, comedy, music, and lifestyle programmes.

As the country faces the impending withdrawal of foreign troops, and with security rapidly deteriorating, the team behind TOLO TV are set to face their biggest challenge yet. 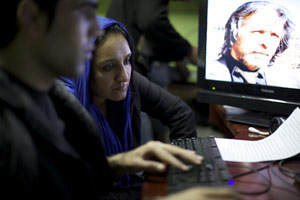 In The Network director Eva Orner gives an insight into the daily life at the tv-station and the learning process they face in these challenging circumstances. Through extensive interviews with managers, producers, on-air hosts and others involved with operations, Orner artfully portrays television as a form of entertainment, education and an agent of change.

This screening is in partnership with Dogwoof