The media & the military: an amicable separation?

Lorna Ward, who has worked on what could be seen as both sides of the argument, as deputy foreign news editor at Sky News and as part of media operations for the TA, started off the discussion with the four points she believes cause the most tension: lack of understanding on both parts, impatience, egos or personalities and lack of communication between the opposing cultures.

Vaughan Smith, founder of the Frontline Club, added that the main contention point is in the treatment of casualties:

“If you go on an embed with the British Army, unless you perhaps are with the BBC or large broadcasting union and you negotiate specific access, you are not allowed to film casualties.”

It wasn’t long into the debate until the MoD’s Green Book was brought up, and that it seems to ignore casualties all together – only referring to them with respect to patient confidentiality, Smith continued:

Major General Jonathan Shaw who served in the Falklands, Kosovo and Iraq before being chief of staff of UK Land Forces between 2007 and 2008, added:

“If you respect their perspective you can have a very helpful relationship – sometimes.”

“When you detect as a solider that this guy [a journalist] has come out to a theatre not to report the truth but to find the evidence to substantiate a story that has already been demanded by the editor back in London, that’s when you lose trust.” 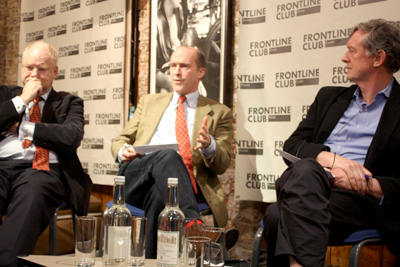 “Working with the military, embedding, being an accredited correspondent is a necessary evil. . . . I use it as an ends to my particular means.” 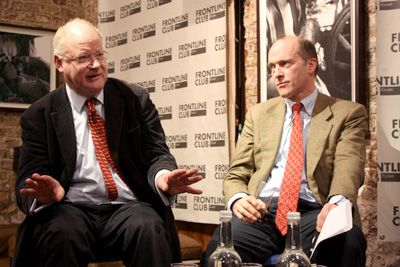 Fox strongly felt that the debate on whether the military should ‘manage’ the media was quickly becoming out of date:

At this point it had become clear that in the audience were other journalists who could add to the discussion. Jonathan Steele, who had just returned from Syria said of the Green Book:

“It is prior censorship, you have to sign it in order to get this embed which gives the MoD the right to read all your copy, look at all your pictures, all your video before you send it out. . . . We go along with this. Why is there no revolt? Why don’t we just refuse?”

Smith added that perhaps it is time to revisit the restrictions of the Green Book.

But what of the future? Is embedding with the military going to be the best way to get a story? Ward answered:

“With competition such that it is across journalists and news outlets there is more and more pressure to get that exclusive. . . . In Afghanistan at the moment, as areas get less volatile, more journalists are starting out on an embed and disembedding half way through and the issue for the MoD is where does our responsibility start and where does our responsibility end?”

Watch the event in full here: