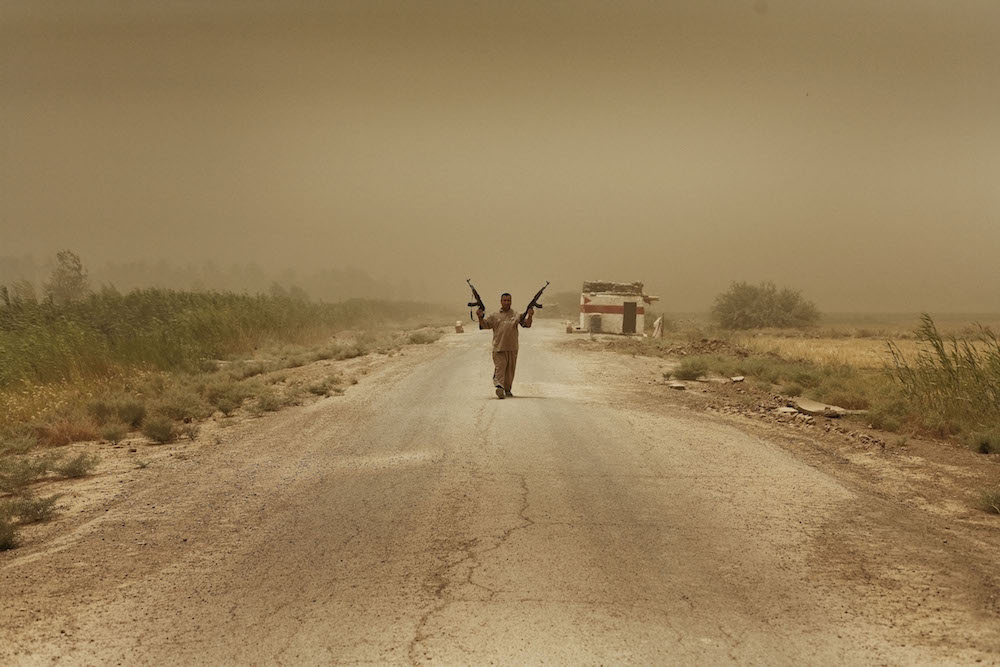 Magnum Chronicles: A Brief Visual History in the Time of ISIS

Magnum Photos have launched a newspaper series to provide a new vehicle for exploring key issues of modern times. We present and discuss the first issue, A Brief Visual History in the Time of ISIS, which includes over 40 images from the Magnum archive, exploring the history and effects of the fall-out from ISIS and their actions over the recent past.

A Brief Visual History in the Time of ISIS, supported by Newspaper Club, is curated by Magnum photographer, Peter van Agtmael and includes an essay and timeline by Peter Harling, an expert on the Middle East, formerly of the International Crisis Group, and founder of Synaps. The work of nineteen photographers is included in this first newspaper, and the images range from those taken in the final years of the French mandate in Syria in 1941 to the fall of Mosul in 2017.

Each Magnum Chronicles newspaper will be curated by a different Magnum photographer, showcasing the breadth and depth of Magnum’s archive, combining contemporary images with archival to offer a unique perspective and context on global social and political issues through to lighter subjects of general interest. The aim of Magnum Chronicles is to create a series of intelligent free democratic publications that inform, engage and entertain through the use of visual narratives. Each publication will also incorporate collaborations with experts and creatives across many disciplines and fields, and will be in several languages.

Patrick Cockburn is an Irish journalist who has been a Middle East correspondent since 1979 for the Financial Times and, currently, for The Independent. He was awarded Foreign Commentator of the Year at the 2013 Editorial Intelligence Comment Awards, and is the author of several books on Iraq’s recent history, including The Occupation: War and Resistance in Iraq, Muqtada Al-Sadr and the Battle for the Future of Iraq and the most recent The Jihadis Return: Isis and the New Sunni Uprising.

Peter van Agtmael was born in Washington DC in 1981. He studied history at Yale. His work largely concentrates on America, looking at issues of conflict, identity, power, race and class. He also works extensively on the Israel/Palestine conflict and throughout the Middle East. He has won the W. Eugene Smith Grant, the ICP Infinity Award for Young Photographer, the Lumix Freelens Award, the Aaron Siskind Grant, a Magnum Foundation Grant as well as awards from World Press Photo, American Photography Annual, POYi, The Pulitzer Center, The Center for Documentary Studies at Duke University, FOAM and Photo District News. His book, ‘Disco Night Sept 11,’ on America at war in the post-9/11 era was released in 2014 by Red Hook Editions. Disco Night Sept 11 was shortlisted for the Aperture/Paris Photo Book Award and was named a ‘Book of the Year’ by The New York Times Magazine, Time Magazine, Mother Jones, Vogue, American Photo and Photo Eye. “Buzzing at the Sill,” a book about America in the shadows of the wars, will come out in Fall 2016. He is a founder and partner in Red Hook Editions. Peter joined Magnum Photos in 2008 and became a member in 2013

Noman Benotman is Quilliam’s President and is an Executive Board Member. He leads Quilliam’s work on de-radicalisation processes in the UK and abroad, working to raise international awareness of Jihadist recantations, co-ordinating Quilliam’s outreach to current and former extremists and using Quilliam as a platform from which to share his inside knowledge of al-Qaeda and other Jihadist groups with a wider audience. He also heads the current research programmes. Born in Libya in 1967, Benotman first adopted radical Islamism in the mid-1980s after reading the books of Sayyid Qutb. In 1989 he travelled to Afghanistan where he fought against the Soviet Union, taking part in battles around Khost, Gardez and elsewhere. After the Soviet withdrawal, he helped set up the Libyan Islamic Fighting Group which aimed to violently overthrow Colonel Gaddafi and establish an ‘Islamic state’ in Libya. In 1994, he moved to Sudan where he forged close links with Osama bin Laden, Ayman al-Zawahiri and other key members of al-Qaeda. Since 1995 he has lived in London where he was initially part of the ‘Londonistan’ scene alongside other senior extremists such as Abu Qatada and Abu Musab al-Suri before gradually distancing himself from Islamism. During the last few years, he has played a key role in the disbanding of the LIFG and the issuing of its ‘refutations’. He is also well known as one of the most public critics of al-Qaeda, appearing widely on international media such as CNN and al-Jazeera as well as taking part in a range of international conferences. He has a degree in Human Development Studies from Birkbeck University and speaks English and Arabic.