The Longest Kiss: Independence, separation and conflict in the world’s newest country

The title of the film comes from the name given to the meeting of the Blue and White Nile in Sudan’s capital, Khartoum – ‘the longest kiss in history’. And the film documents the social and political issues surrounding the rift between Sudan and South Sudan, providing a window into the lives of ordinary Sudanese from both the north and the south.

Starting in June 2009, the film follows the run up to the referendum in 2011 and its immediate aftermath.

Sicotte-Lévesque first went to Sudan in 2006 to work with the UN. “I had a lot of apprehensions,” Sicotte-Lévesque said. “I had never lived in a Muslim country. I did not know what to expect as a western woman.”

However when she arrived in Khartoum she was pleasantly surprised and was amazed by the tolerant society she found. “My perceptions completely changed once I got there,” she said.

As BBC correspondent in Sudan from 2009 to 2012, Copnall covered many of the events portrayed in the film. His book picks up where the film ends, following Sudan and South Sudan post-separation, with a focus on the people themselves.

Despite separation, for both Sicotte-Lévesque and Copnall, the link between the two countries remains the defining issue in the region. Copnall said:

“The major thing I want to bring out in the book, and I think you see it in the film too, is that despite the separation there are so many links still between Sudan and South Sudan that you can’t really understand one without the other. Neither will be peaceful unless they have a better relationship with each other.”

When asked why conflict continues in South Sudan, Copnall cited decades of conflicts which caused huge amounts of damage, both in terms of infrastructure and developments. Copnall also attributed continued fighting to the political culture. He said that with rebel leaders becoming the ‘guiding light’ the conflict will, regrettably, persist. 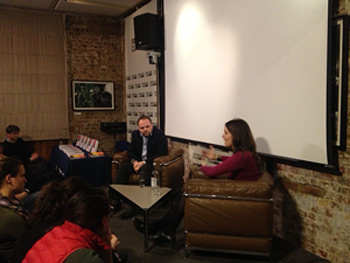 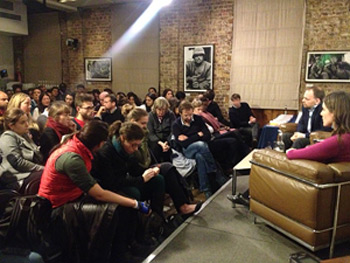 The Longest Kiss looks briefly at the role of John Garang in the 2005 peace process. An audience member raised the question if Garang had not died in a helicopter crash in 2005 and had continued to play an active role in Sudanese affairs, what situation would Sudan be in today? Copnall answered:

“When the helicopter crash happened, that was the end of that dream of a united Sudan, and it was clear from that moment on, probably with hindsight, that separation was going to happen.”

Sicotte-Lévesque’s experience of massive posthumous support for Garang during the 2010 elections confirmed his unique role as the only figure capable of resisting separation. However, Garang’s stance as an alternative, unifying force, made his position untenable.

“Even though his death was probably accidental . . . he had to die. I don’t think anyone would have allowed him to keep going because his popularity was becoming too much, both for Khartoum but also for people within his own party, who perhaps did not agree with the idea of unity,” said Sicotte-Lévesque.

Concluding on the question of whether they felt independence and separation were an inevitable consequence of the specific conditions within Sudan leading up to the referendum, Sicotte-Lévesque said:

“There were so many ingredients, there was only a period of five years between a peace agreement and a referendum and five years is not enough time repair and reconstruct a country and even the idea of unity after 20 years of a very bloody civil war – especially when the political will was not there.”

However, for Copnall and Sicotte-Lévesque there remained a desire to always return to the ordinary victims of these conflicts, as much as dissecting the actions of the perpetrators. Copnall said:

“I think in terms of similarities we both focus on people, not just politicians, but ordinary people and how their lives are affected by major events and everyday events.”

To find out more about of The Longest Kiss and stay informed about future screenings you can go to the film’s facebook page or follow Alexandra Sicotte-Lévesque on twitter.

James Copnall will be hosting an event organised by the Royal African Society at the Khalili Lecture Theatre, SOAS on Tuesday, 25 March 2014 at 7:00PM, Separation and the making of South Sudan.