The Life and Work of Eve Arnold

Di Giovanni was joined by Magnum photographer Susan Meiselas, as the pair presented the Magnum Legacy illustrated biography of Eve Arnold, sharing the stories and work of one of the most prolific photographers of the twentieth century.

Di Giovanni discussed the process of unraveling the various aspects of Arnold’s life, sorting through boxes of her meticulously archived records, notes and photographs to create the final compilation of her work and stories.

Arnold was a 38-year-old housewife and mother living in Long Island when she stumbled across photography. In 1948, she enrolled in a six-week photography course and, tipped off by her son’s nanny, went to photograph a black fashion show in Harlem. It was the start of a long career spanning the rest of her life, documenting stories throughout the world. In 1951 she became the first woman to join Magnum Photos, and went on to create a vast photographic portfolio of immense depth and diversity.

From intimate portraits of Marilyn Monroe and Malcolm X to the documentation of migrant workers and disabled veterans, she indiscriminately captured a wide range of people and subjects.

“She would dive into a subject and spend so much time. Nothing was rushed; nothing was what journalism has become now,” said di Giovanni. “For her it was the art of sitting down with people, spending time, investing an extraordinary amount of energy.” 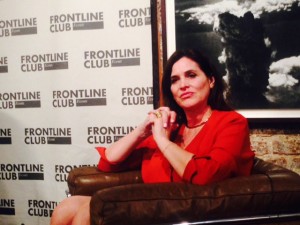 As they discussed the processes behind Arnold’s work, the conversation moved onto the loneliness of her work and the challenges she faced, particularly as a single mother away from her child. She often travelled alone, a petite women carrying huge equipment, usually not familiar with the local language.

“You have to put yourself in her shoes and imagine the absolute tenacity, courage, bravery and fearlessness of doing this in a time when women did not do that,” said Di Giovanni.

An example drawn upon was her persistence to photograph in China, an experience that took nine years to accomplish.

“The stamina, the determination, the waiting nine years for a visa. Believing that she wanted to be one of the first women photographers to go to China, that inspired me,” added Meiselas. “You felt that in every bone of her body there was no stopping.”

Meiselas read a quote from a card that Arnold had titled ‘freelancing,’ shedding light on the complex relationship she had with her work: “Feel bereft when a project ends. Like all the attention and concentration is gone, like a child that has grown up and gone away. And suddenly you’re alone, right on, freelancing.”

As the conversation opened up to questions, the challenges facing freelance photographers in today’s media world was addressed.

“The assignment culture has diminished dramatically,” said Meiselas. “When you look at the online culture, its pretty discouraging… There may be a day when they [news outlets] don’t need to pay anyone because there’s so much content being produced.”

“There are ways,” added Di Giovanni. “You have to be resourceful and determined… As long as we all agree that this kind of photojournalism is essential, it’s the first draft of history, we have to have it, you can’t let it die.”