Elizabeth Wood of DocHouse began with a discussion on the craft of editing:

“Fiction films are shot to a script, but really, with a film like this, and with all Kim’s films, a script is really written during the edit.”

“I think the best documentary films are like fiction films,” responded Huddleston:

“You’re building a story. . . . I look at this film now and I see it’s of course a film about Tamil Nadu and Muslim culture and Salma, but the important thing is always that it should connect to us. It’s a very universal story in some ways. The bonds, the knots, the ties, the families. Fear of breaking away and not being able to break away.”

An audience member asked if the village had changed since the film was made.

“My experience of the village,” said Huddleston, “is what I see through that material. My understanding is that it hasn’t changed, no, not at all. And I think Malik – Salma’s husband – is quite unusual. As much as he was a very strong part of keeping her away and keeping her apart from society, he also helped her to break free, and that’s very unusual.”

“He must have grown too, in a way do you think?” followed Wood.

“Yeah, the weirdest thing was that Kim and Salma, when I finally met her, said he liked the film, that he was proud of the film. That is amazing for me,” said Huddleston. “Because he doesn’t come across brilliantly sometimes. Kim said he was a lovely guy and incredibly friendly and all the rest of it, but maybe he’s happy that the story is being told. He seems very proud of his wife so eventually maybe he’s coming around and maybe the village will change, one day.”

“But,” countered Wood, “do you think perhaps he’s the one who made his sons critical of her?”

“Yes, I do. Definitely he did. But he’s part of the village, isn’t he? I mean they all are. So the village tradition has meant that they’re all bound by the past and traditions that women are locked up and hidden away.” 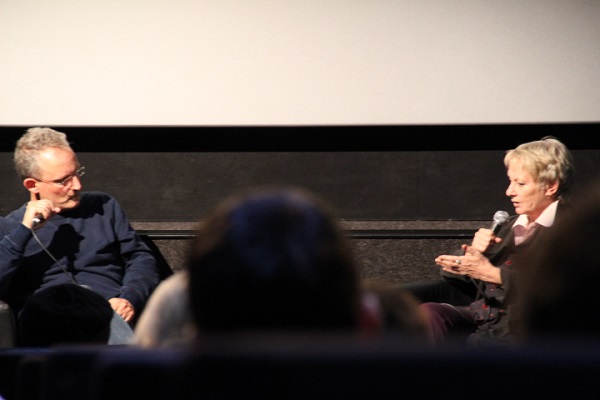 Huddleston then spoke of the difficulties faced during filming:

“Salma had to hide a lot. They thought she was making some kind of drama film and she was going to make money out of this film in some way. So I think there was a lot of antagonism in the village. But she’s an extraordinary, pragmatic, charismatic, thoughtful, incredibly eloquent person so I imagine she found a way to explain it to them, and to get the film made.”

Hands went up in the audience to ask about the inclusion of the Hindu wedding:

“We wanted to balance the film out. That it’s not just Muslim weddings. I mean, that girl is about 10 or 11. It happens quite a lot in the village so that was the reason. It’s quite shocking, and truthful.”

Is she, Salma, interested in the world of politics and making a difference that way?

“She started a women’s refuge in Chennai and yes, she’s very interested in changing the world, most definitely,” explained Huddleston. “Politics is one way of doing that but I think at the moment she’s writing. I couldn’t say whether she’d go back into politics again. Maybe.”

Huddleston then responded to how he approached representing the many complex characters:

“You try to make stories develop. . . . Throughout the film you’re probably thinking, ‘God, how could she [Salma’s mother] do that to her daughter?’ . . . In the end, she helps her publish her books, she smuggles them out – she’s more complicated than that. So to be really crude about it, there’s a kind of set up about who the mother is. You think she’s this person then, later on, you’ve changed your opinion of her. ‘Wow, she’s stood up, she went and got the books, she sent them to a publisher, she is on Salma’s side.’ There’re many references to the mother and the complexity of that relationship is huge and crucial to the film really. You’re trying to make it understandable and very real.”

To conclude, Huddleston commented on the circularity that the film depicts:

“It’s that idea that we’re constantly going in a circle. When she lies on the floor and says, ‘What can I do, I can’t leave the ones that love me, I’d be completely alone,’ isn’t that true of all families? It’s a circular thing. That seemed to be the most truthful point. She’s still yearning for her mother’s approval or love or closeness. Nothing has changed, in certain ways, even though she’s done extraordinary things.

“It’s because it’s a film about circles. Circles within families, within tradition, within religion, and trying to break free from those. That felt like the most honest end, the most truthful end. Nothing is simple.”

A collection of Salma’s poems and Longinotto’s reflections on creating the documentary is published by OR Books.

Upcoming films in the Between the Lines Follow-Up series can be found here.