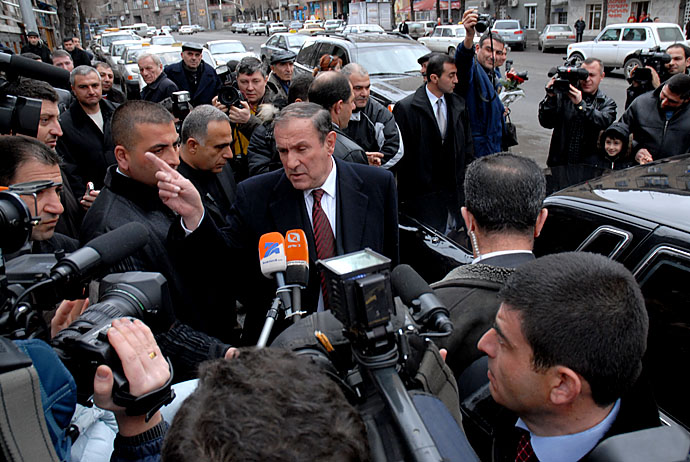 Following the recent announcement that the next rally to be staged by the extra-parliamentary opposition will be held just weeks before a crucial municipal election to decide the capital’s mayor, it perhaps comes as no surprise that the Armenian National Congress (ANC) will contest the vote. However, news that its leader, former President Levon Ter-Petrossian, will head the ANC list on 31 May has startled many observers. The second candidate on the opposition list is Stepan Demirchian, himself a former presidential contender and the son of Armenia’s popular Soviet-era boss.

The election will be the first time residents of Yerevan go to the polls to indirectly choose their city head. Previous presidents, including Ter-Petrossian as well as his successor, Robert Kocharian, had resisted calls for a popularly-elected official to govern the political and economic heart of the country until the constitution was finally amended by referendum in 2005. The main candidate for the ruling Republican Party of Armenia is former head of the city’s Kentron district, Gagik Beglarian — better known to most residents as "Chorni (Black) Gago."

In a written statement, the ANC noted the importance of the vote. “With this move, we are sending a very clear political message to society. We regard the election of Yerevan’s mayor  as a very serious opportunity to change the existing dictatorial system and, if you like, as a second round of the 2008 presidential elections,” it read. In last year’s bitterly contested election Ter-Petrossian lost to the current president, Serge Sargsyan. Nearly two weeks of street protests followed the 19 February vote which most observers consider should have gone to a run-off.

On 1 March 2008, the tense post-election standoff ended with fatal clashes that left 10 dead, hundreds wounded, and a 20-day state of emergency declared in the country. "This will be a struggle for lawfulness," commented ANC office coordinater Levon Zurabian during a press conference held today in Yerevan. "We have come to combat this tyrannical, criminal and oligarchal system to establish democracy in the country. This will not be a struggle against Beglarian. Our main rival is the regime."

With two damning reports from Human Rights Watch and the U.S. State Department criticizing the post-election situation in Armenia, it is unlikely that the authorities could survive any repeat of the events which followed last year’s presidential vote. However, with the recent collapse of the dram exasperating existing socio-economic tensions, it cannot be ruled out. Indeed, given the potential for an elected mayor to rival the power of the presidency, many already suspect the vote will be tense and probably accompanied by vote-buying and other electoral code violations.

This is especially true given concerns already expressed to Frontline by the head of one international organization monitoring the run-up to the election in addition to developments such as Beglarian’s sudden appointment as mayor earlier this month. Meanwhile, in the hope that a united front can counter the administrative resources available to the incumbent candidate from the party of power, discussions between the ANC and the parliamentary opposition Heritage party to form an electoral bloc are reportedly underway.

Some analysts also suggest that the Republican Party might well decide to find another candidate more able to match the political clout of Ter-Petrossian, but publicly it remains as confident as ever of victory. In the meantime, with news that the first and former president is once again entering the fray, the municipal vote looks likely to be very interesting indeed. Certainly, it will represent the first real test of Armenia’s fledgling democracy since last year’s disputed and highly controversial presidential election.