Tears of an Afghan Warlord 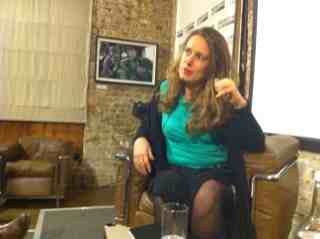 After nearly a decade in the making, Tears of an Afghan Warlord had its UK premiere on Friday night, with director Pascale Bourgaux on hand to tell the story behind the screen.

Bourgaux dedicated the evening to Frontline News Television cameraman James Miller, killed in 2003 while filming in Gaza, and France 2 journalist Gilles Jacquier, who died earlier this month covering the Syrian uprising.
The risks taken by Bourgaux and her numerous crews have been equally great – returning to the village or Dasht-e Qaleh despite the encroaching Taliban, in order to portray the life of Mamour Hasan.
Hasan leads a life of hope in the opening scenes in 2002; having battled against the Taliban in the stunning green hills of northern Afghanistan, he enjoys the admiration of the local people and lives in relative wealth. But by 2008 uncertainty has arrived – Hasan has willingly given over his weapons to the central government under the pledge of peace, but a weak local police force and broken promises have led to a state of anxiety – and problems the Taliban is trying to fix.
The situation when Bourgaux returns in 2010 is one of further decline, and as she tells the Frontline audience, is more complex than good versus evil:
"Hasan might have democratic concepts in him but of course he is running a feudal system, having all the money from taxes and distributing it to things he thinks are important. He is applying the power as a good man. Maybe the choice is not Taliban or democracy as we know it. But when the Taliban have the power it is a dictatorship."
Bourgaux admits the story she tells in just one hour has taken her 10 years to understand, but the Frontline audience were eager to share their views, and apportion blame for the struggle underway in Dasht-e Qaleh.
One viewer, part of Bourgaux’s film crew, poured anger over Afghan president Hamid Karzai:
"The Americans came in and backed Karzai with money. Karzai and his brother are the most corrupt ever. The Americans didn’t care – they had a puppet."
A fellow audience member, from King’s College London, pointed the finger at the wider international community:
"Karzai was just appointed and gained control of a process with no political base. His base is the western aid money and the western military power – we are propping up a corrupt and abusive government and the Taliban is playing Robin Hood."
Bourgaux agreed, saying that everyone is responsible for watching what their government is doing in Afghanistan and being aware of its impact on a bastion of resistance:
"I think it’s amazing that in this stronghold against the Taliban, they’ve changed that much. How is it possible? How? This should be the last village resisting."
While Tears of an Afghan Warlord finishes on a precipice, Bourgaux is sadly sure of the story’s end:
"I asked Hasan, ‘What will happen if the Taliban comes?’ He said, ‘They’re going to kill me, and kill my wives and my family.’ This is the message – he knows this is the end – he needs to say it because otherwise his life is worthless."