Tarun J. Tejpal: The Story of My Assassins – Part 1 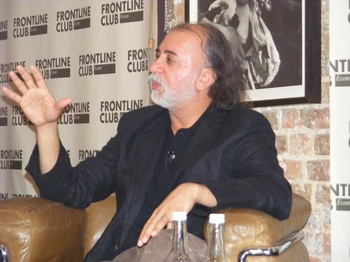 Tarun J. Tejpal, founder of India’s news organisation Tehelka, famous for its public interest investigations, shared its inside story and his thoughts on Indian journalism in a discussion with the BBC World Service’s Shahzeb Jillani on 25 September at the Frontline Club.

Tejpal related details of some of Tehelka’s most high-profile investigations, including ‘Operation West End‘, a 2001 sting to expose corrupt arms procurement at India’s Ministry of Defence. Reporters posed as weapons salesmen and used secret cameras to record bribe-taking by officials. Not long after the story broke, an attempt on Tejpal’s life by hired hitmen was foiled by the police, an event which became the inspiration for his most recent novel, The Story of My Assassins.

Tejpal also touched on Tehelka’s investigation into the Gujarat killings of 2002:

“In 2007 we sent a reporter to Gujarat and he went underground for six months and took footage of mass murderers talking on camera about the Gujarat killings. It was picked up by the Supreme Court of India and three weeks ago they nailed three key figures in the killings, one was given a 30-year sentence … The Gujarat judgment was a great vindication for us – when we broke it [the original story] we were attacked [for doing so].”

Jillani challenged Tejpal on whether he personally “took the glory” for work carried out by his reporting team. Tejpal replied that many journalists from Tehelka had gone on to “build fabulous careers for themselves” while equally “a lot who have built huge reputations at Tehelka have left and never done anything good again”. He put this down to something in the organisation’s DNA, saying:

“There is a mood at Tehelka, people don’t look to chase fashion designers and sports stars, they want to make a difference and crack stories. Our job is clear – not to seduce two million readers but to affect public policy. If you can convince one politician, one public figure, to take the right decision, you can affect the lives of millions of people. Whether we do it through shaming them, arguing with them, moralising with them, it doesn’t matter.”

Responding to a question from the floor on how Tehelka manages to fund six-month-long undercover investigations despite its sometimes precarious finances when well-funded British news organisations expect reporters to file every day, Tejpal said:

“We go the extra mile relentlessly and so far we manage to keep going. I don’t see how you can get your teeth into game-changing stories unless you give them time and space.”

The weight of public policy change should be aimed “at just one constituency – the poor”, Tejpal added, he called India’s inequality levels “absolutely hysterical”.

“Forty-seven per cent of India’s children below five suffer from malnutrition. [Yet] you have this fantasy of being a superpower, a nuclear power. The social contract in India was, the more you have, the more you have to give back. In the last 25 years we have forgotten that. What is gorgeous about India is its founding vision – Gandhi … a picture of nobility and compassion, who comes from great wealth and elitism and spends his life battling poverty. We fight for that idea of India.”