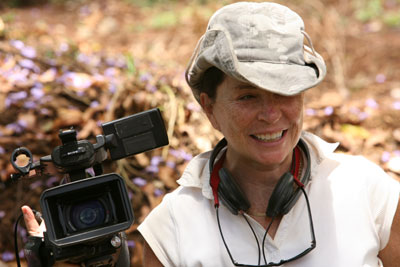 Original Frontline TV agency camera woman Tira Shubart recently finished filming and producing a TV comedy series called Taking the Flak about the world of war reporters, stringers and fixers all set in a fictional African country called Karibu. Tira produced the film with Jon Rolph and it draws on her experience as a foreign correspondent covering war zones for the old Frontline agency and other media outlets. She dropped me a line about the series which I thought I’d share with you here,

“Taking the Flak” is the story of journalists covering a small war in a (fictional) African country. The stringer (Bruce McKinnon) based in Karibu, is disconcerted to find a high-powered team from London parachuted into his patch. And the local fixer (Kobna Holdbrook Smith), who saves the team time & time again, also turns out to have his own agenda.  And then there are a few romantic interests as well…

Creating a fictional civil war can be trickier than covering a real civil war. And I now have had experience doing both.  The major factor in staging a fictional war for “Taking the Flak” is that Health & Safety is even more stringently observed. Hence we moved our shoot from Kenya after episode one, reeling from post-election violence a year ago, to neighbouring peaceful Tanzania with the same backdrop of the spectacular Rift Valley. So our UK cast & crew were joined by our Kenyan and Tanzanian team members.

Coming from news, where we move so quickly and to a tight deadline, the logistics of working with a cast & crew of 50 or so, initially brings on culture shock. But it’s soon apparent that every person is needed to create the world that we wanted to portray on the screen. Each set up—and over a seven part series, there are hundreds of set up needs the full camera, sound, lighting, costume, props, makeup teams…. And the “action vehicles” some of which had convincing looking “mortars” built onto them, like the “technicals” I’d filmed in Somalia in times past.

Not to mention the logistics of moving all the cast & crew around (and any extras) on rutted African roads.  Then there is the all-important catering. Good food is a necessity, not a luxury when you are working 12 hour days in the African heat six days a week for several months on end. Our catering was supplied by safari outfitters who usually feed people on treks up Kilimanjaro. So being on mostly level ground, even in out bush locations, seemed no challenge to them. Their vehicles ferrying food and chairs & tables were always a welcome sight. So much for the Hollywood luxury with air conditioned trailers equipped with mini bars. We had tents for shade and rudimentary bush toilets under canvas for pit stops.

The two direcors of photography are Pete Rowe, from the world of drama, and then from news: Darren Conway (DC) who has won Camera Operator of Year at the RTS three times plus other awards from the many conflicts and news stories he’s covered over the years.