The yearly general and regional ‘conferences’ of the Tablighi Jamaat are perhaps the most undercovered big events that go on in Afghanistan. Last year I went to the general meeting in Kabul, a 4-day event that over 10,000 people attended. Not a single report was written, be it foreign media or Afghan media.

Now to my mind a meeting of 10,000 explicitly religious men from all over the country (with higher numbers coming from the south, even) would seem a pretty important event, if only just to hear what these guys are saying.
So when I heard they were meeting in Kandahar yesterday, I thought I’d head out and see how they do things down here. The venue was the Id Gah mosque next to the university. It is well known as ‘the mosque that Mullah Omar built,’ and reputedly not a single brick has been added to it since he left in 2001.

[The founder of the Tablighi Jamaat, Mawlana Mohammad Ilyas Kandhalawi] was a prominent member of the Deobandi movement and throughout Tabligh’s history there has been a degree of association between the two groups, although Tablighi Jamat does not see itself as Deobandi. link

I’m sure you’ll all remember of the frequent analyses of the Taliban that tie their religious world view with that of the Deobandis… But in actual fact, especially for Kandahar, the Taliban don’t get on well with the Tablighis at all.
So the Tablighi Jamaat are an association of the ultra-religious. You could certainly say that religion is their life, to the exclusion of almost everything else. In fact, they seem so busy discussing religious matters and praying that they don’t find time to follow some of their own advice.

A couple of my friends down here explained how nobody in Kandahar took them particularly seriously because they were always preaching on the virtues and obligations of jihad, but that they never could find to actually get out and fight themselves. “They’re too busy preaching,” they said.
They are pretty engaged in what’s known as da’wa, which is sort of a call to persuade people to come over to the right side (whether that’s conversion, or just reforming and becoming a ‘proper muslim’ again).

So in Kabul I found myself being introduced to a crowd of a thousand on a loudspeaker system, only to be asked, “since it’s Friday, and since it’s such a holy day, and since it would such a great blessing for us, why don’t you convert to Islam in front of us today. It’d be great!”
One of the other things I found interesting talking to them in Kabul was the extent to which they seemed completely uninterested in politics. And believe me, I spent hours wandering up and down the makeshift tents they’d erected on a barren football field slightly outside town, listening out to any snippets of conversation that might be unrelated to religion.

Nothing.
So, lest anyone in Washington read this and get any ‘smart ideas’, let me just make the point that these hundreds of thousands of tablighi jamaat scattered around the country are not ‘the third force’, or ‘the solution’ for Afghanistan. If they’re not going to be bothered to fight for the Taliban – and, talking to some of them, you’d be hard pressed to distinguish the two – they’re certainly not going to fight for you.
I find it a bit depressing that I have to add these disclaimers to my posts these days.

Tomorrow I’ll dissect an article from the AP on the proposed idea for ‘tribal militias’ and explain why it’s unsuitable for Kandahar. Oh, and you can view some other photos I took on Flickr here. And here’s a photo montage from the murals inside the mosque from when I first visited back in the summer of 2004: 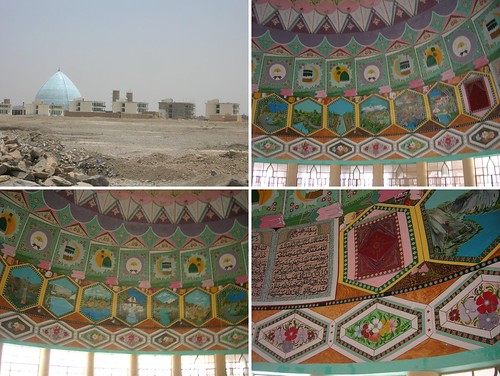