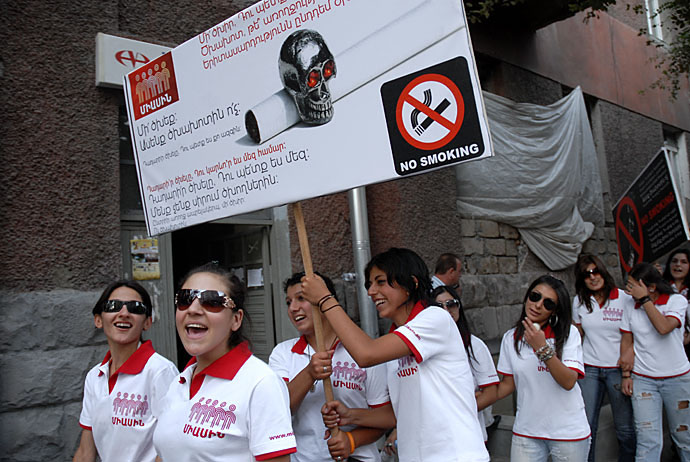 Conversation in Yerevan was ablaze this week with talk of an anti-corruption protest that bore all the hall-marks of a coloured revolutionary youth movement at work. On the walls and other structures close to many universities and colleges, the names and photographs of lecturers or other administrative staff alleged to be on the take were posted and accused of taking bribes.

However, despite ostensibly appearing to be a grass-roots campaign to fight corruption in the education sector, those responsible for the action were not rebellious young students linked to the political opposition, but members of Miasin, a pro-government youth movement modeled on the pro-Putin Nashi in Russia. Miasin is believed to be controlled by the Armenian presidential spokesperson, Samuel Farmanyan.

A statement on the organization’s web site explained why the action was being staged.

The time has come for the students themselves to work for the establishment of the rule of law in the schools. Corruption in the education system merely serves to spawn similar practices in other sectors since it is the educational system that is churning out the corrupt leaders of tomorrow.

Nevertheless, Miasin had until now largely been considered a joke. Its first actions staged last summer against smoking were seen as a way to deflect the attention of young Armenians away from pro-opposition youth movements such as Hima and more neutral progressive groups such as Henq. Its later action of staging a rock concert with free beer handed out to passer-bys was seen as an attempt to confront overnight anti-government strikers camped out opposite.

Now, questions are being raised about the purpose of Miasin’s most recent action. Certainly, corruption remains a huge problem in the Armenian education sector with one dean even being shot in uncertain circumstances in recent years, but nobody is sure if the anti-corruption activity is genuine or not. Other youth groups, usually restricted in their activities on-campus, have used the issue to mobilize disenchanted youth in the past.

Is Miasin simply trying to exploit the problem of corruption in Yerevan’s universities and campuses, or does it represent a genuine attempt to tackle the problem with the tacit approval of the authorities? Time will tell, but protests initiated by other student groups have resulted in pressure from police, interrogation by the National Security Service, and threats of explusion.

The police, which react harshly to similar actions by opposition groups, have not questioned any of those activists so far. This fact prompted speculation that they were instructed not to stop the leaflet distribution.

But Major-General Nerses Nazarian, chief of the Yerevan police, brushed aside such suggestions. “We can not support or participate in such actions,” he said. “We certainly do not agree with that view. If people have any evidence [of corruption] they can apply to the police.”

Nazarian argued that the police can not investigate the legality of the Miasin action without receiving a written complaint from individuals or organizations targeted by the youth group supporting President Serzh Sarkisian. “I am told that Yerevan State University is preparing to lodge a formal complaint,” he told a news conference. “The police will certainly deal with that fact.” link