Stuart Franklin and the Tank Man

Franklin took the photograph on the morning of June 5th, 1989, following the army’s massacre of student protesters in Tiananmen Square the previous day.

“I had been in Beijing for about six days leading up to June 5th – and I had expected the demonstration to end peacefully, at least until the army arrived in force. . . . I did take many photographs trying to crystallise a moment of defiance. It was evident at the time that the uprising was a significant historical moment.” 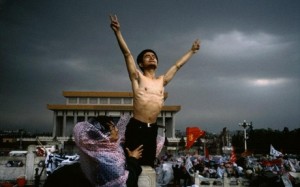 Three other photographers were also in the Beijing Hotel as well as Franklin and captured the same moment: AP photographer Jeff Widener, Newsweek photographer Charlie Cole (with whom Franklin shared a balcony), and Reuters photographer Arthur Tsang. These images, which spread around the world on front pages the next day, were lucky to have been seen at all as the Chinese security forces threatened to destroy them. Cole had to hide his roll of film in the bathroom cistern, but Franklin said: “I was lucky, I gave my film to someone to take to Paris and they got through without problem.” The film was smuggled out in a packet of tea by a French student and delivered to the Magnum office in Paris. 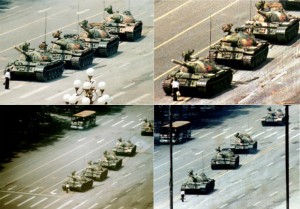 Franklin’s image earned him a World Press Photo Award in 1989 and was featured in LIFE magazine’s ‘100 Photos that Changed the World’ in 2003. But despite the fame that the image now has, Franklin said of his reaction now to the image: “I’m sort of reacted out, if I’m honest. I looked at it today and although the latent emotion is still there, I don’t deal with this on a day to day basis.”

Franklin’s photograph in many ways typifies the role that Magnum has played over the past 65 years, documenting and witnessing historic events, but he points to the challenges currently facing the industry. “Mostly, magazines and newspapers take out subscriptions to one or two press agencies. There’s little spare money to engage with, let alone support, powerful work by individuals. The challenge facing independents is where to place good work and how to get paid to produce it” he said.

To mark the recent release of Magnum Revolution: 65 Years of Fighting for Freedom, the Frontline Club will host Magnum photographers Ian Berry and Peter Marlow on Thursday 13 December, who will speak about their careers and experiences photographing war and peace with the book’s author, Jon Lee Anderson. The event will be chaired by Monica Allende, picture editor of the Sunday Times Magazine. 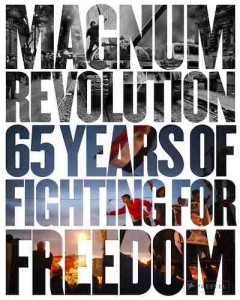 Copies of Magnum Revolution: 65 Years of Fighting for Freedom will be on sale at a special discounted price of £30 on the night and the speakers will be available for a signing after the talk.