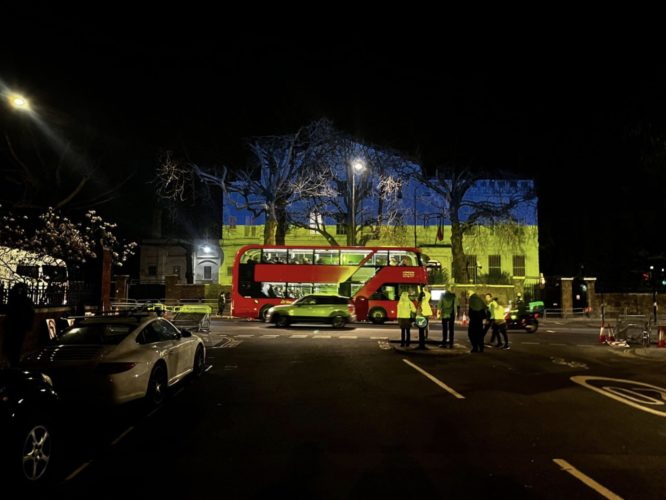 Straight From The Frontline (#SFTF) is a new initiative aiming to provide urgent practical help to support freelance journalists on the frontline in Ukraine.

It’s a development from the Frontline Club Freelance Registry ‘FFR’ which has experience of providing press cards and equipment, and continues to be a collective voice representing freelancers’ interests.

As well as providing freelancers with material and logistical support, it aims to create a 24/7 home base in Lviv for journalists travelling in and out of Ukraine; a place to gather safely, to network and pick-up gear.

A month into the war, the Ukrainian people were stunning the world with their steely resilience.

Back in London the club was buzzing. People were rushing up and down the stairs, holding secret meetings, huddled in booths, scribbling notes on paper and onto laptops.

Long evenings turned into nights. Cups of coffee were exchanged for Negronis. Something was cooking at the club.

Frontline’s in-house team was being supported by branding and communications experts to help plan a media stunt at the Russian embassy in Notting Hill Gate. We planned to project an image of the Ukrainian flag across the building.

The extended production team gathered in the club. We sat around the large club table, admiring the posters and placards, and a 5m long banner, freshly printed with the faces of the five journalists who’d died doing their job in Ukraine.

Tonight was about paying them a tribute, celebrating their memory, encouraging others to continue to bear witness.

As the plans were finalised, we headed off to our location for a final recce.

The Russian embassy is located on the north west corner of Hyde Park. It’s a vast three storey, off-white building guarded by a couple of bare oak trees. In truth, it’s a little scruffy and looks as if it’s seen better days.

The gate was locked, the curtains were closed. A sad-looking Russian federation flag fluttered in the breeze.

Two bored policemen stood cross-armed, mumbling to each other as a handful of protesters held up cartoons of Vladimir Putin. They waved tinted yellow and blue cardboard in front of the passing crowd.

We planned the final positions for our ‘action team’ of celebrities and journalists. Actress Rosamund Pike – who played Marie Colvin in the film ‘A Private War’ had agreed to attend alongside Paul Conroy, Marie’s long-time photographer and close friend.

We planned for them to stand right in front of the embassy, squeezed in between the security barriers and the main road.

The van carrying the projector was expected to pull up at 20:00 on a double yellow line. The idea was to project onto the building from inside the van and keep the image up for as long as possible to make the point. We feared the police would intervene.

Everyone on the team RV’d at the Champion pub 20m from the embassy. Spirits were high, excitement palpable; drinks were being served. Within minutes, our crowd had taken over the entire ground floor.

At 19:58 with 2 minutes to spare – and to the landlord’s great relief – we set off. The van as planned had pulled up outside the embassy.

We marched across the main road towards the embassy carrying placards and the banner. The building was bathed in blue and yellow light, the colours of the Ukrainian flag. The protest team held its posters high in front of the embassy. It was a proud moment for Frontline Club.

We’d arranged for video and stills media to be there. Our celebrity supporters gave some powerful statements.

Rosamund Pike: “Journalists bring us the truth from the ground and for that truth they so often killed. It happens all over the world and it’s happening now in Ukraine. Journalists are being targeted and not killed by accident. The people we have in our arms today,

Carole Cadwalladr: “There is a war against truth happening right now and we can see that so clearly in Ukraine. If we don’t have journalists reporting from Ukraine, we’re not going to know what is happening there and lies will win, Putin will win.”

Contrary to our fears, the police officers were actually helpful and made no attempt to stop us from protesting. Instead, they deployed orange cones to protect us from the passing traffic as cars sounded their horns in support. The police were sympathetic to the cause.

After about 30 minutes of projection, interviews – and high emotion – the projector was turned off and the embassy returned to darkness, its flag looking even sorrier than before.