Talk of the town: The UK’s unwanted immigrants 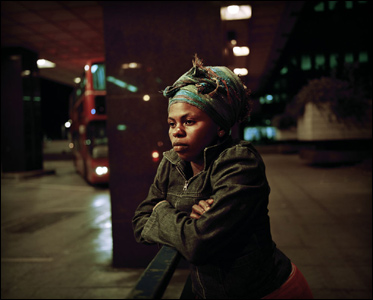 A sobering and substantial piece of work by London-based photographer Abbie Trayler-Smith seems to have made an instant impression in the city this week.

An exhibition of her stark images of rejected asylum seekers still living in the UK has opened in the capital’s Host Gallery, winning both publicity and acclaim for the photographer. Among the highest-profile showcases, the BBC featured a selection of her images in an online gallery.

A high-quality video to accompany the show, featuring the still photographs and testimonies from the subjects, has also been released on Vimeo and elsewhere.

As Kate Day writes in her photography blog for the Telegraph:

The exhibition exposes the hidden lives of those who are trapped in an impossible no-man’s-land, unable to return home but prevented from working to support themselves. They can only wait and hope their lengthy appeals are successful.

Abbie spent many months volunteering at a drop-in centre for asylum seekers before she started taking pictures. She explained that building a relationship with each individual she photographed was vital, not least because she did not want to "be a vulture" and exploit their vulnerability.

The trust she clearly developed with those she photographed has enabled her to shine a light on the drudgery of daily existence for these people. Cheap canned food heated directly on a gas stove in a squat in Leeds, the blackened feet of a figure lying on a shabby mattress, footprints in the snow in North London. Abbie’s pictures take us right to the heart of these immigrants’ lives and sensitively expose the hopelessness of their predicament.

The photographs are availalabe through Panos, which represents Trayler-Smith (a former Telegraph photographer of some repute), and are notable for their lighting and colours, with the overall look and feel of each frame complementing the often truly saddening tales they tell.

What also strikes me as interesting is the sheer depth and intensity of the project. As noted above, the photographer spent "many months" in research and, doubtless, many more actually shooting.

In today’s world of quick deadlines and shrinking opportunities, it’s heartening to see that those at the top of their game still find the backing to work on projects like this.

Dominick Tyler, a close friend of Trayler-Smith’s who blogs at photojournalism.co.uk (good address!) has asked her to blog about her experiences working on the project and putting on the show. It should be an interesting read.