Some little man in a Colombo cafe started shouting abuse at me the other day. I don’t know him, and I don’t know why. That sort of thing is very rare here, but perhaps I shouldn’t be surprised, given the current "you’re either with us or against us" climate. The vast majority of the Sri Lankan media outlets are now, voluntarily or not, marching to the beat of the government propaganda machine. Even the once incorrigible Sunday Leader now sports editorials that could almost have been written by the ministry of information and some columnists who write as though they’re applying for a job at the Media Centre for National Security. Any foreign media outlet that dares question the official version of how the war was won is immediately labelled as part of some sinister international conspiracy which, having first, for some reason, supported the LTTE, is now, for some reason, hell bent on sabotaging what is presented as the new united Sri Lanka.

Perhaps the little angry man I met  in he cafe had just read the newspaper The Island’s feature article “Foreign Correspondent” (worth a read, that one), which ascertains that “The print media are the foot soldiers of the LTTE”, and goes a long way towards explaining how we are ultimately responsible for having prolonged the war so that we could continue to enjoy the comforts of being based in Sri Lanka. The same article appears on the Sri Lankan Ministry of Defence’s website, so I suppose it must all be true.

Also on the MoD website, and just about everywhere else, is President Mahinda Rajapakse’s instructions to his subjects on how to celebrate the victory over the LTTE without hurting anyone’s feelings. “Magnanimous Mahinda” has a good ring to it, and to be fair, most of the 100,000-plus crowd in Friday’s flag-filled festivities to honour the country’s war heroes behaved far better than the man in the cafe. Not all did, though. After a few hundred metres of the parade had passed came the less-than-magnanimous effigies of dead LTTE leader Velupillai Prabhakaran. Closely followed, perhaps by coincidence, by the not entirely media-friendly government minister Mervin Silva. 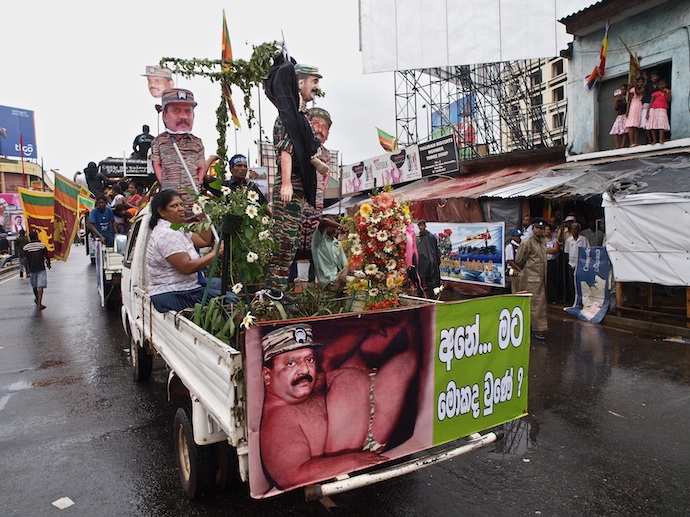 What effects the victory celebrations and the politics that follow them will have remains to be seen, but some are already becoming clear: in my largely Tamil neighbourhood in Colombo there are not many Sri Lankan flags flying from people’s homes.