Colin Freeman, a journalist with the Daily Telegraph (on the right on the picture below), and Jose Cendon, a freelance photographer, were set free today after being kidnapped in Somalia some six weeks ago on November 26, 2008 while reporting on piracy in Bosasso, 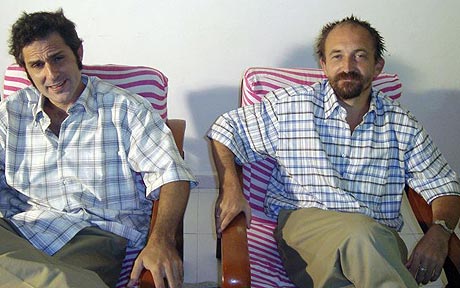 "The two journalists are free after their ordeals," said the head of Puntland police, Abdullahi Said Samatar. "They’re taking some rest now and they will be available later. I’m happy to see them recovering their freedom." link

The release was confirmed by the Spanish government in Madrid, whose ambassador to Kenya was en route to Puntland from Nairobi.

We previously reported on the abductions back in November, but agreed to pull coverage after discussions with those involved in negotiations with the kidnappers. The decision to pull posts I previously published about Colin Freeman and Jose Cendon wasn’t made easily especially after our previous discussion about the Mellissa Fung kidnap case in Afghanistan.

The ongoing saga of freelancers Amanda Lindhout, Nigel Brennan and Abdifatah Mohammed Elmi is always in the back of my mind when linking to these stories. Are freelancers, like Lindhout and Brennan, always at far more risk than their staffer colleagues?

No doubt this is something Sean Langan, Channel 4 journalist, Frontline Club member and recent kidnap victim, will be discussing at the Frontline Club at the end of January. I will be at the event on January 30 and hope to report on Sean’s kidnap in full.

UPDATE: The Daily Telegraph has more,

"We’re absolutely fine and delighted to be out. We’ve absolutely no problems at all ether physically or mentally… We survived on rice, goat meat and Rothmans," said Freeman. "I gave up smoking in 1992 and somehow decided now would be a good time to start up again." link via Press Gazette Twitter.

Photo from the Daily Telegraph.