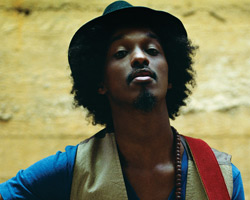 In recent years Somalia has often made the headlines for all the wrong reasons. Piracy, poverty and lawlessness have cast a long shadow over the Horn of Africa.  Two generations of Somalis have been scattered forming a diasporas across the world. Many still live in refugee camps in Ethiopia, Yemen, Kenya and as far away as South Africa.  In South Africa, those refugees found themselves on the receiving end of xenophobic attacks. This has made their plight in the country more difficult and uncertain.

Somalis have always eyed sports events closely and in the Beijing Olympics were just happy to be there and to wave a flag. There seems to be a need for recognition, seeking validation that the place still exists in the eyes of the international community.

The World Cup is coming to South Africa and it needed a unifying and inspiring anthem. A song written by a son of Somalia and a survivor of its troubles was most suited to feed that sense of hope. K’naan, a Somali born Canadian musician was approached by sponsors to do the anthem and he obliged. Interestingly he had already written the song Waving Flag, it was the last song he wrote on his Troubadoure album. The song is melancholic and speaks of troubles and loss but always had the potential for being tweaked to inspire. Coca Cola, the World Cup sponsors, approached him and told him they wanted someone who could represent the African continent and not shy away from being vocal on its behalf. This was before they even knew about the song.

I met K’naan and his manager Sol Guy when he was on tour in London last May. Back then the whispers of the Coca-Cola sponsorship anthem had just begun.  K’naan was back in London in transit last month en-route to Mozambique when I met up with him again. On both occasions he was most generous with his time.  We spoke of his recent trip to Somaliland and how it has been instrumental in inspiring his music. He described his trip as necessary and as a ‘key to an artistic lock’ that hehad come up against.

During his recent travels across 18 African countries, K’naan saw that Africans “no matter the scenario, the difficulty, the hope and the beauty, …always expressed it through love …and music”.  He is determined to make music to that feeling [of hope] and not just produce a “soundtrack to difficulty”.

Some have criticised the choice and argued that a ‘real’ African pop song should have been written and recorded on the continent itself.  It should make no difference where it was written. If the diary of genocide survivor was published in Europe or North America it would not detract from the authenticity and the credentials of that survivor’s story. By the same token music written by a Somali artist enriched by his own experiences is a real African pop anthem giving real hope to real people, not least South Africans of Somali origin.

K’naan has been nominated for 3 Juno Awards [Canada’s answer to the Grammy’s] and the ceremony takes place on April 18th 2010. I have a sneaky suspicion he will be waving not a flag but a Juno, or two, or maybe even three.