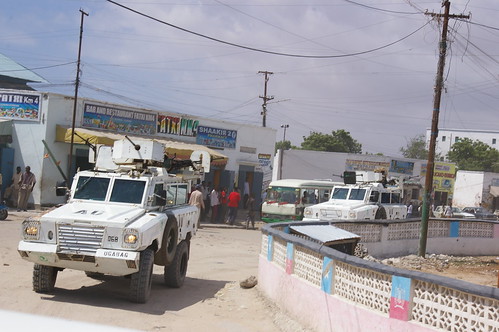 Sheikh Adan Madobe, speaker of the U.S.-and U.N.-backed Somali parliament, resigned today after his support in the weak governing body collapsed. Prime minister Abdirashid has also resigned after seeing his own influence wane amid continuing violence in the East African country. "The president is going to appoint a new prime minster and the MPs are supposed to appoint a new speaker for the parliament," correspondent Hiddig Jamaal reports.

The shake-up comes at a time of escalating violence. Last week, fighters from Hizbul Islam, one of two major Islamic groups battling the government, attacked a neutral health clinic and refugee camp, apparently seeking to either extort money from the camp guards or force one of them to repay an old debt. At least 10 people died in the attack, including eight sick children whose care was interrupted.

"Government troops and forces from the African Union retaliated with heavy artillery and mortars towards the city’s southern Bakara area, one of the main rebel strongholds," Jamaal tells us. "Several artillery salvos and mortars hit Bakara market. Fifteen civilians were killed and 52 wounded," Ali Muse, head of the Mogadishu ambulance service, told Jamaal.