Showing at Frontline: Up in Smoke 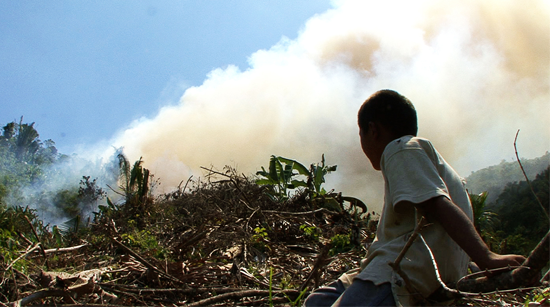 Up In Smoke, from director Adam Wakeling, is screening on Mon 25th July at Frontline. The film follows revolutionary ecologist Mike Hands across the globe as he attempts scale back slash and burn agriculture – one of the biggest contributors to global warming and deforestation in the world today.

Wakeling’s first feature length offering effortlessly combines Hands’ scientific research with the trials of Honduran slash and burn farmers Faustino and Aladino – one of which has already adopted Hands’ pioneering technique ‘alley cropping’, the other waiting to be convinced.

Encompassing both the life and death struggle of impoverished farmers who can’t afford to risk adopting a new farming method and our driving need to change the fate of our planet’s endangered rainforests, the film plays out Hands’ struggle to get people to understand his revolutionary method and the pressures that prevent its implementation.

Up In Smoke’s dramatic, globetrotting path finally leads to the Copenhagen Climate Summit in 2009 where Hands’ attempts to draw international attention to a truly global issue reach their climax. Not to be missed, Wakeling’s film is a bold address of the complex moral questions about saving the planet for future generations as well as protecting the livelihoods of those living today.

More details about the screening are here. There will be a Q&A after the film with Director Adam Wakeling and Ecologist Mike Hands.