Shorts at the Frontline Club: a cinematic journey around the world

In The Last ‘V’ of Vaclav Havel, director Jan Rendl takes us into the crowd of the state funeral of Václav Havel in Prague, on 22 December 2011. Havel was the first post-Communist president of Czechoslovakia and then served two terms as president of the Czech Republic.

The camera moves between close-ups of mourners’ faces, bowing priests and official proceedings, to figurative gestures in the mass of movement that surrounds a man who now lays still. In tribute to Havel’s social commentary as a dissident playwright, the footage is narrated by the speech of the late dissident-turned-statesman, critiquing the society he leaves behind.

Rendl also features a vocal cameo by the Dalai Lama who said of Havel:

“He was a friend to humanity.”

The next destination was to the pitch black streets of Kabul, in Dusty Roads.  Only a generator-powered kiosk and the headlights of passing vehicles illuminate the dust that fills the air. Dust is swept up by the brooms of street cleaners who toil to survive. Director Ali Hazara depicts the road sweepers and their interminable, unrewarding work as a metaphor for Afghanistan’s troubles. They curse the militants who destroyed their homes and livelihoods, as well as the corruption that is as all-pervasive as the dust: 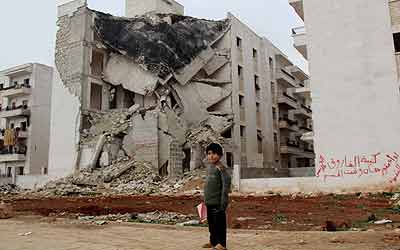 Next, Aleppo is under fire from snipers, aerial bombardment and artillery shells. The metal kills indiscriminately, and terrorises without prejudice. In Transition, directed by Marina Darmaros and Wissam Moukayed, the latter takes us on his journey from Russia to his home town of Aleppo.

The mission: to uncover the reality facing the civilian population in Syria. Moukayed is a former Syrian army officer, whose father witnessed the Al-Mashara massacre – one of several during the 1980 Siege of Aleppo. Between sniper fire and rebel checkpoints, Moukayed finds Syrian Army deserters who claim they were ordered to kill peaceful protesters, unexploded cluster munitions in residential neighbourhoods, as well as schools, homes and families torn apart by the violence. On returning to his home town, Moukayed describes an image Aleppo where:

The final leg of our tour took us to Moscow, where we were once again in the midst of a crowd. Every year 5,000 children are invited to the Kremlin’s official Christmas party. Afterwards, they must circle the square until spotted by their parents, like baggage at an airport.

Director Valeriy Shevchenko zooms in on the faces of anxious children and parents to take us Inside a Square Circle, where chaos is organisation, and the state is love. There is palpable relief when families are reunited at the end of the organised fun, which in reality seems closer to organised anguish. As one child reveller put it:

“Never again will I go to this party!”

The Christmas party may also serve as a subtle reminder that, should this child continue to voice such criticism of the Kremlin’s idea of order, anguish can very easily be organised.