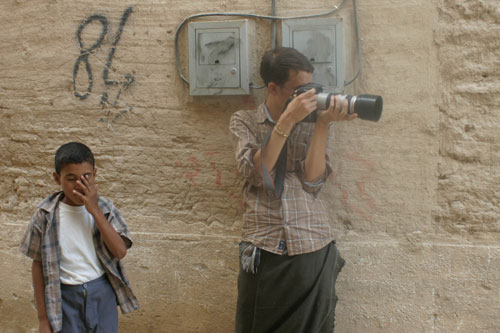 On the 30th of December last year, two French journalists were kidnapped by an Afghan ‘warlord’ whilst covering a story for France 3.

When news was received of their capture, an immediate request was sent out to other news organisations not to release the journalists’ names due to safety concerns.

Six months earlier, on July 31st, a similar dilemma faced the family of a young American freelance journalist, Shane Bauer, when he was abducted by Iranian officials whilst on a short working holiday in Iraqi Kurdistan.

Shane’s family had no choice about disclosure of his name… it quickly became public knowledge and the media rapidly descended en force.

The key difference being Hervé Ghesquière and Stéphane Taponier had the support of a large media organisation, while Shane Bauer had none.

Shane Bauer’s situation demonstrates what happens when such a crisis descends on people who do not have the backing that money and influence brings.

To add to the complexity, three families were involved because three people were detained, while only one was a journalist.

The US state department was supportive and the families managed to get help and advice in handling the media. However, this is not the same as having the backing of a large corporation to advise on decision making.

In Shane’s case, there were legitimate worries. Worries about how Shane might be treated in Iran if too much attention was paid to his work, especially as his capture coincided with the violent aftermath of the pro-democracy demonstrations.

Often in past cases, where a journalist has been ‘abducted’, the world’s media often takes up the case themselves. It becomes a matter of supporting one of ‘their own’.

Things began to change around the 6th month mark for the campaign to release Hervé Ghesquière and Stéphane Taponier and also for the ‘Free The Hikers’ campaign.

In France, the six months captivity of the French journalists was seen as an outrage.

To mark the occasion, local officials in Bordeaux and Nantes put large portraits on government buildings and in the Luxembourg gardens in Paris.
French newspapers ran full-page ads by the Paris-based NGO, Reporters Without Borders.

France did what it does best.

For Shane Bauer and his two friends, six months of detention received little media attention. The US media is a very different animal to that in France. It lacks the unity of spirit of a smaller country.

So, despite the best efforts of family and friends, coverage was limited.

One Year in Jail

In a few days time Shane, Sarah and Josh will have been in Evin prison for one year. A year in which they have been subjected to horrors they will never forget, in a prison where torture and executions are regular affairs.

A year in which all three were subjected to long periods in solitary. To this day, Sarah is still in a cell on her own for twenty-three hours a day.

And how will this gruesome anniversary be commemorated?

No town council will be hanging banners. Reporters without Borders won’t be taking out full page adverts.

Instead, Shane’s family will be holding small vigils and activities throughout the world, hoping upon hope that the media will report this.

There is a glimmer of hope. Finally, after nearly a year, the media in Europe is beginning to listen to the story.

Perhaps, as the media becomes more passionately involved, the governments will listen.

You can read more about Shane Bauer and the story of his detainment here.

Shane’s mother, Cindy is visiting the UK on the 21st July to talk at the Frontline Club, for full details of the event and to book tickets please see here.