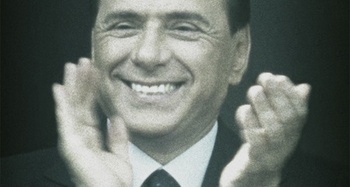 Videocracy, screened yesterday at the Frontline Club, is a groundbreaking documentary by Italian-born, Swedish-based director Erik Gandini about the power of Berlusconi’s TV culture over Italian society at large. Showing the dark side of TV industry controlled by Berlusconi over the last 30 years, Gandini gives a precious insight over a fictional world dominated by his personal obsessions. The film starts with a 1976 quiz show in which housewives would undress after contestants answered questions correctly. A simple premise but one that appears to have shaped decades of Italian culture.
Described as “intriguing” and “a dreamy, mesmeric and highly disturbing psychogeography of 21st century Italy” by the Guardian, Videocracy has received a chilly reception in Italy in 2009. Not only Berlusconi-owned broadcasters, but also Italian public TV dismissed the trailer, for being too unbalanced, political-sided and depicting women in a “inappropriate” way. “These are Orwellian, old-regime style motivations,” said Gandini. “The truth is that the documentary showed something new and disturbing: the connection between Berlusconi’s personality and what we have seen in Italian TV in the last decades.”
Gandini said that he wanted to portray the Berlusconi-phenomenon rather than Berlusconi himself, who is “overexposed”, according to the director. He coined the phrase The Evilness of Banality to describe “Berlusconism”, in a word play on Hannah Arendt’s Banality of Evil. “The message is: just have fun, it’s harmless,” he said. “It is like a mantra, reiterated by every TV programme at any time of the day.”
Videocracy guides through a celebrity driven culture using three tour guides each with their own place within the industry, Mechanic Ricky Canevali who dreams of fame; Lele Mora, Italy’s primo TV agent  and Fabrizio Corona, a paparazzi who bribes celebrities to buy back unflattering photos of themselves.
In a shocking scene, Lele Mora shows with proud his cell phone with a ringing tone taken from the fascist hymns, saying that he admires Berlusconi because he reminds him of Mussolini. “I was surprised that Mora and other people felt so secure about their position,” said Gandini.
He added that the flow of images which characterize Italian television – with naked girls, grotesque shows, silly TV format – is a mirror of Berlusconi’s personality and inner dreams. “I personally feel scared when I watch those TV programmes,” he said. “But Berlusconi was the right man at the right place in Italy, and his televisions have shaped Italian culture and customs in the last 30 years.”
Berlusconi’s biggest quality is strictly connected to his communicative skills, according to Gandini. “He is a nice guy, he smiles all the time. I personally can’t,” he said. “Italian’s morality is slowly shifting from a good-evil conception to a funny-boring one. It doesn’t matter if it’s wrong as long as it is funny.”